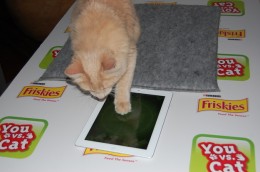 Forget about feeding your cat. Soon, you’ll be able to enrich its mind while simultaneously competing against the little guy in an app called “You vs. Cat" on iPad. Cat connoisseurs Friskies is behind the air-hockey-meets-interspecies-action title, and it’s tuning the experience specifically to pit you versus your cat. In a small demonstration at SXSW, Buzz Feed played against an adorable little kitty named Buddy, and was beat an amazing three times in a row. In fact, cats are up on humans by around one thousand games at the time of this posting.

There’s a lot of cat-specific apps out there. The vast majority aren’t games, though, which is what makes this remarkable. No doubt, our own Bearded One Jared Nelson will put this game to the test whenever he can. He’ll report his findings immediately, and with lots of gushy language because, cats.