Check out our write-up all over again! We’ve added some fresh images and a few more thoughts on Outwitters.

Games like Hero Academy and, surprisingly, the new SSX on consoles, are seeding the opinion that asynchronous play is THE way to do multiplayer. After catching a solid glimpse of One Man Left’s upcoming turn-based strategy game Outwitters at GDC, we’re convinced that it is. The proof is in the demo, which wowed us on several levels.

As One Man describes it, Outwitters is “a little like Chess, but with spawn points and explosions." It’s a solid comparison: both titles leverage the fact that their pieces possess wildly unique movement patterns and attacks. In the same way that Chess players mull over their moves for millennia, Outwitters users will inevitably end up taking the far-reaching, thinking man’s approach to play.

This is what makes the asynchronous component pop — One Man’s game isn’t afraid to make you think, and a strictly turn-based environment is a perfect environment for this style of play. At launch, the title will also support online asynchronous play, as well as an insanely well produced online league system with specific tiers and brackets for 1 vs 1 and 2 vs 2 team-style play. Players start in “Fluffy" league and work their way up.

It’s probably much easier to think about Outwitters as Shining Force Meets StarCraft, as it riffs off of StarCraft’s rock, paper, scissors style of tactical action and blends that with traditional grid-based play. Images tell the tale: 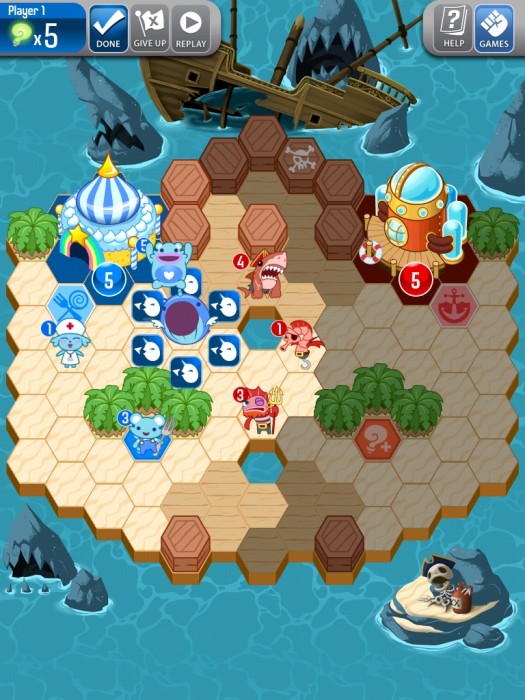 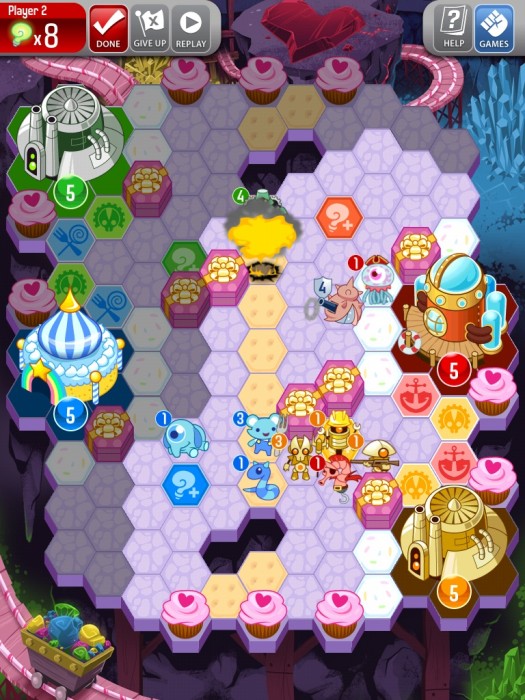 At launch, Outwitters will sport three teams, each of which will have six pieces in total. Five of those pieces are shared between the three teams. The sixth is a special unit unique to that given team. The Feedback, for example, a robotic squad that oozes with personality, has the Scrambler. Its brain-like body has the power to hijack an enemy unit and put it under your control.

Each turn is divided into a series of moves drawn from a pool. Moving takes a couple of those spots, while buying units, such as the Scrambler, or a typical piece like a medic or an archer, does the same. To us, it seems like the highest level of strategy requires careful consideration of what to buy and when. Resources are severely limited, as each turn seems specifically designed to keep immediate, aggressive action to a minimum.

When we played One Man, we loaded up on heavy units so we could perform the equivalent of an elephant rush. It failed. One Man easily zipped up our flank and danced around our meat barrier, leaving our base destroyed and the game over. That’s tactics 101, but it was nice to see that the game was artfully balanced.

Speaking of art, this game is gorgeous. One Man tells us that it really wanted to break out of the more… bland look of its previous title, Tilt To Live, and flex its muscles with Outwitters. We didn’t measure these muscles, but they’re obviously big. Just take a look around this article. There’s a lot of fine detail work that defines who the pieces are before you even tap to discover their movement and attack range.

Outwitters is due out in the next couple of months. The plan right now is to launch at free and support the game with IAP downloads. Before you freak, do know that these guys get the free-to-play is really annoying, so they’re working hard to make IAP as out of the way as possible, but still worth the cash.