One of Apple’s more “magical" features in the past year is AirPlay, which allows you to stream the screen from  your iPhone 4S or iPad 2 wirelessly to an Apple TV and right onto your HDTV. Soon, the new OS X Mountain Lion will allow you to do the same thing with your Mac, beaming whatever is on its screen to your TV wirelessly. In terms of gaming, AirPlay offers an additional avenue for playing iOS games – wirelessly on the living room TV – and some titles like Real Racing 2 HD have taken it a step further and offer a custom interface or additional features for playing the game that way.

While Apple has made it incredibly easy to beam the latest iOS devices to a television, and soon will be able to beam a Mac to a television, it’s strange that there’s not also the ability to stream an iOS device right onto a Mac. Someone else must have thought that was strange too, as there is now a new Mac app called Reflection that allows you to do just that. Streaming to a Mac using the Reflection app is just as simple as streaming to a television with an Apple TV. Just run the program on your Mac, and choose the AirPlay option on your iPhone 4S or iPad 2 and just like that it’s on your computer screen. 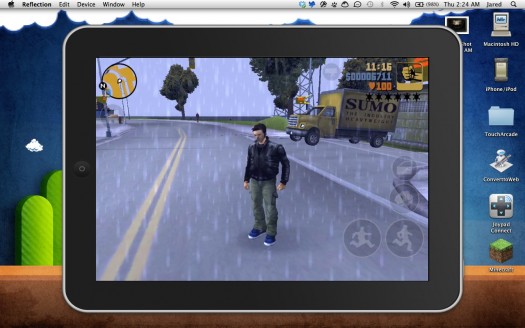 This sort of functionality has all types of useful applications, but the first thing on my mind was how well games would play using Reflection. For the most part it works pretty good, and it will largely depend on which game you’re playing whether you have a good experience or not. This is mostly due to the slight lag that is present when using Reflection, where your actions on your iOS device translate to your Mac just a tad off from real time. This tad can make a big difference in games that require precise and timely touches, and I shudder to think of playing something like Beat Sneak Bandit with that slight delay.

For lots of games that lag won’t matter though, and it is pretty cool playing iOS games on my MacBook Pro. Another thing I noticed is that the frame rate in Reflection isn’t as smooth as what’s on the actual device, but it isn’t terribly noticeable. Reflection also comes with the options to view the game in an iPhone or iPad frame, much like the simulator in the iOS SDK, or play in frameless or full screen modes. Reflection reacts accordingly when changing your device’s orientation, and you can lock it in either portrait or landscape if need be. 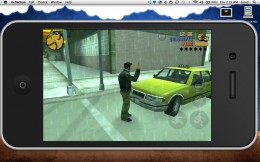 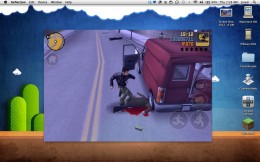 Reflection is a neat piece of technology, I can see it being incredibly useful to some. But for gaming it feels more like a novelty due to the sluggishness of the performance, but it’s still pretty neat and I think that performance will improve over time. If you own a Mac, you can grab a trial version of Reflection for free to test it out. It gives you just 10 minutes of time per day to mess around with it, but that’s enough to see how it works and decide if it’s something worth buying. If you do, the full version of Reflection will set you back $14.99 for a single license.