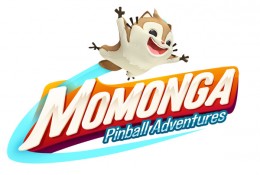 Paladin Studios, who have previously released the quirky skydiving-esque game Jimmy Pataya [99¢] on iOS, have announced that their next project will be a pinball action game hybrid called Momonga Pinball Adventures. You play as Momo the momonga, which is an actual thing, an adorable Japanese flying squirrel to be exact. Momo is on a mission to rescue his momonga friends who have all been kidnapped by a group of evil owls that recently attacked their village. Momo is hurt in this attack as well, but is rescued by a panda who then gives him the training needed to defeat the leader of the evil owls, General Kuton.

Yes, a game where a Japanese flying squirrel is injured by a pack of evil owls and then nursed to health by a panda does sound pretty crazy, but probably not any crazier than a plumber traversing a magical Mushroom Kingdom to save his Princess love interest from a weird fire breathing dinosaur/dragon/turtle thing. The zaniness of the premise actually suits the colorful, cartoonish world of Momonga Pinball Adventures, which you can check out in the following trailer.

Bopping Momo around with flippers is about where the pinball influence ends, and Momonga will have a large focus on point collection and speed, as the developers note in the comments on their video. There will be structured levels to complete, boss fights, and fully animated characters that move the storyline along. This certainly isn’t the first game to take pinball mechanics and mash them together into something more, but it’s an idea that I’ve seen used to great effect to provide interesting and varied gameplay. I’m hoping for some more of that with Momonga Pinball Adventures, which is slated to hit the App Store sometime in Spring.