So this is pretty weird. Last week, the classic Japanese role playing game from Atlus, Shin Megami Tensei [$13.99], appeared in the App Store.

Originally released for the Super Famicom in 1992, the game was re-released for the PlayStation and the Game Boy Advance about a decade later, but the game has never been released outside of Japan (though unofficial English-translated versions do exist around the web). The original Shin Megami Tensei has spawned tons of sequels and spinoffs, and the entire series has an extremely dedicated following.

Now, when I first saw Shin Megami Tensei in the App Store, I was almost certain it wasn’t a sanctioned port. In this line of business, unauthorized ports or ripoffs of popular games appear fairly often, especially as of late it seems. 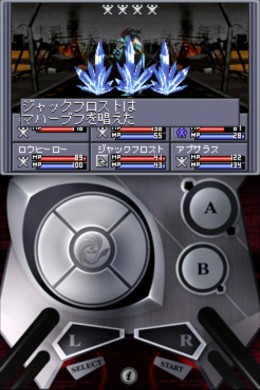 The iOS version of Shin Megami Tensei definitely did not look legit. It had an atrocious virtual control overlay that took up more than half the screen, and the app description sounded like it had been carefully reworded from the Wikipedia entry on the game.

Oh, and the entire game was still in Japanese only. Let me repeat that: the game is entirely in Japanese with no English whatsoever.

So based on that, and given the fairly hefty price tag, I was ready to write Shin Megami Tensei off as just another unauthorized cash grab. Except, upon further snooping, it’s not.

It’s published by Index Corporation, the Japanese company that bought Atlus several years back. A tweet from Atlus Japan’s Twitter account confirms that they are officially behind this iOS version. It appears to be a bare-bones emulated port of the 2003 Game Boy Advance version, with no special care put into translating it to iOS. But hey, it’s Shin Megami Tensei on your iPhone, I guess.

If you know Japanese and can deal with a no-frills port, then this is likely your dream come true. For anybody else, this is probably just a frustrating example of what could have been. A proper, English-translated port of Shin Megami Tensei that has been carefully crafted for the iOS platform would make a lot of people happy, and although I don’t think it’s likely, I’m holding out hope that Atlus is considering something like that for the future.

For now, if you are down to drop $14 just so you can carry around the original Shin Megami Tensei in your pocket, then I won’t judge you.