I didn’t really mean to play Eufloria [$4.99] and Mass Effect at the same time during the last few days, but accidentally playing two games on opposite ends of the science fiction spectrum has been fruitful. On the one hand, Mass Effect seems absurdly violent at first glance, sporting photorealistic visuals and third-person shooting. Your character can, quite literally, be a renegade. On the other, Eufloria is relaxed and ambient, full of soft lines and leisure. It’s a game about growing flowers.

But Mass Effect is about saving lives as much as ending them. And, beneath the surface, Eufloria is a killing ground: no quarter for your enemies as your troops get sent again and again into the breach. That same incongruity between mechanics and presentation infects the rest of the game.

Eufloria is a stripped down real-time strategy game about growing trees, sprouting seedlings, exploring space, and colonizing empty asteroids. The traditional trappings of the genre are there, but repurporsed to fit the game’s laid-back aesthetic. Your only units are seedlings, which come in three varieties: fast, strong, and energetic, each of which serve different purposes. These seedlings are sent out to raid nearby asteroids, tasked with killing any native species and planting Dyson trees — i.e., barracks — which in turn sprout more seedlings. The only resource to manage is your time which, unfortunately, isn’t highly valued by the two-man development team. 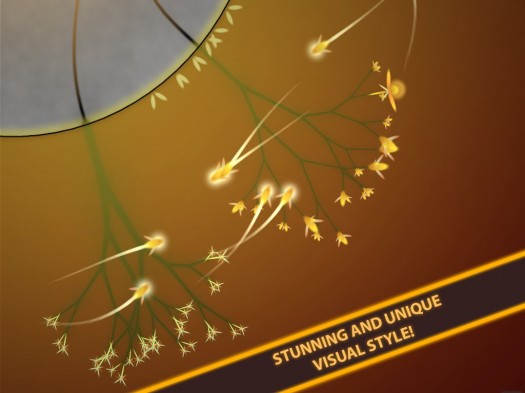 The internal logic of Eufloria seems interesting at first: older enemy Dysons are harder to kill than younger ones. The central conflict, then, is a question of timing your attacks and troop surges — players must wait until they have enough troops, but can’t wait so long that enemy trees have had time to put down solid roots.

The rub is that colonizing asteroids is hard, dangerous work, especially when there’s already a colony of seedlings entrenched there. Expanding your colony’s territory generally involves sending wave after wave of troops crashing against the defenses while your nearby Dyson trees regenerate troops. Every war is one of attrition, of stockpiling little insectoids until you’ve amassed a lurching wave of them. 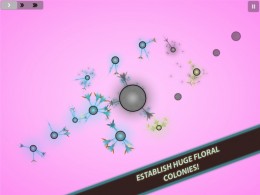 In practice, Eufloria plays out more like an asynchronous turn-based game than a real-time strategy.  There are, in general, very few problems that can’t be solved by more seedlings which is simultaneously terrifying to consider and frustrating to play through. Set a few Dyson trees going and come back later to finish the assault; if it didn’t work, wait some more — don’t worry, the other colonies will wait patiently while you regroup. The best strategy is to do nothing, to watch your trees spit out more dots. This means waiting, waiting, waiting, until you have enough seedlings and watching the rest of your empire to make sure your outlying colonies aren’t pre-emptively attacked.

As a result, Eufloria often grinds to a halt, giving players plenty of time to zoom in on their colonies and watch their asteroids bloom to life, tiny seedlings buzzing and swooping in orbit. Players can speed the game up, but this does little to alleviate the fact that Eufloria‘s defining mechanic is inaction.

Increasing the difficulty or fast-forwarding the game forces players into the zoomed-out view so that they can monitor their slow-growing empire. If nothing else, Eufloria is beautifully detailed by it’s pastels and minimalistic aesthetic, but players sticking to the tactical view aren’t likely to see it. Whatever its faults, Eufloria is a visual delight, superlatively evocative of the natural forces at play in something as simple as growing plants. 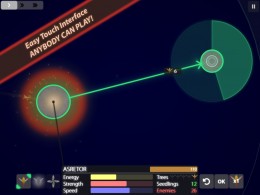 When the pieces are finally in play, Eufloria comes alive and reaches its gestalt. Most enemy colonies are docile until attacked, but lash out violently after. Different strands of seedlings are useful in different stages of the assault, and a full-fledged attack requires moving troops through the colony while keeping each asteroid properly garrisoned. A clean UI and fantastic controls makes moving troops tactile and intuitive and, even in the fog of war, new mechanics start to take shape. There’s no “rally" system — and the “beacon" system only works for newly sprouted seedlings, not pre-existing platoons — so troops have to be moved asteroid by asteroid: swipe, swipe, swipe. Your ability to expand is curbed by your ability to move troops around.

When Eufloria peaks, seedlings criss-cross the screen, maneuvering around Dyson trees and turrets, swarming smaller colonies. Zoom out, and tiny dots are replacing one another in different parts of the screen; zoom in, and you’ll see localized dogfights and clusters of thick, puffy seedlings taking out turret-like Defense trees. Normal developers would revel in this type of carnage, but Eufloria keeps things abstracted and austere. It’s really quite beautiful to watch.

My favorite tactic is to purposefully expose a frontier asteroid and goad the enemy AI into taking it while I sneak around and take their unmanned colony. I lost a colony, yes, but it’s now surrounded by my asteroids and its Dyson trees are undeveloped and weak. In character-driven games, I wouldn’t dream of sacrificing soldiers; in Eufloria, it’s glorious. Attack first, spare no one, troops are expendable — these are the lessons Eufloria teaches.

At its best, Eufloria is dynamic and engaging, buoyed up by a great, tactile interface on  the iPad. It can be a beautiful and evocative game, but the intense moments of action and triumph are bracketed by a lot of waiting and futility. Even when an abortive assault doesn’t end in mission failure, just regrouping to try again can take several minutes. Restarting an entire chapter to try a different approach could represent half an hour or more in wasted time.

Eufloria made a graceful leap to touch devices, but it puts its best foot forward frustratingly rarely, often cutting players out of the game entirely. In the too-brief moments when you’re invited back in, however, Eufloria‘s a treat.