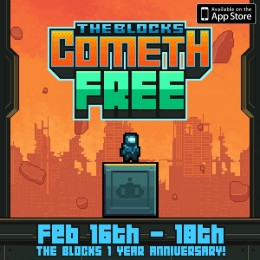 It was one year ago today that Halfbot released The Blocks Cometh [Free] into the App Store, a game we enjoyed immensely in our review. Several months after its release, a pretty beefy update added landscape support, new characters, two new difficulty modes, and an awesome GameBot mode available as a 99¢ IAP.

Since that update last July, though, things have been relatively quite on the Blocks Cometh front as Halfbot has had their hands full working with fellow indie developer Vlambeer in bringing Super Crate Box [$1.99] to iOS (a hugely successful endeavor, I might add). With that out of the way, Halfbot is again back to giving some love to The Blocks Cometh.

First off, the game is temporarily free to celebrate its one year anniversary. The game has never been free before, so if you’ve been interested in The Blocks Cometh but have had trouble parting with a dollar, now is the time to strike. Halfbot has also announced that an impending update will bring Universal iPad support as well as support for the iCade. Pretty cool, right?

Oh yeah, there is one other thing coming in the new update: 5 brand new playable characters. And, 3 of those new characters are none other than – drumroll please – the TouchArcade Crew! Yes, that’s right. As a show of support as fans of TouchArcade, Halfbot has taken on the Herculean task of squeezing Brad’s muscles into the confines of a video game screen. They’ve done a great job too, and have also successfully caught the essence of myself and Eli in pixelized form. Check out the promo shot of the TouchArcade Crew characters below: 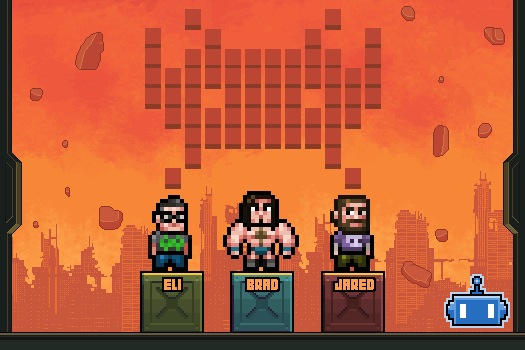 I’ve been sworn to secrecy on who the other 2 new characters are, but rest assured they are worthy additions to the roster. We actually aren’t even the first game journalists to appear in the game, as last summer’s update included video game reviewer extraordinaire Jim Sterling. If we could somehow get a mode where I can make Brad battle Jim, then The Blocks Cometh would be just about perfect. While I won’t hold my breath for that, I will be heavily anticipating this latest update to hit.

There isn’t a solid release date for the update just yet, as Halfbot is still toiling away at it while simultaneously working on an update for Super Crate Box. It’s all good though, I told them to take as long as they need in order to get my pixel beard just right. For now, make sure to grab the game while it’s free for the next couple of days, and you can bet that as soon as the latest Blocks Cometh update hits – complete with playable TouchArcade crew – we’ll be the first to let you know.