One of our favorite releases from earlier this year was The Blocks Cometh [99¢] from developer Halfbot. This Flash game to iOS port had you controlling one of several characters who must dodge and stay on top of the endless stream of blocks inexplicably falling from the sky. The goal was to get as high into the air as possible while avoiding getting crushed by a falling block, and each of the 5 available characters had their own unique attributes such as special jumps or weaponry to destroy blocks with.

With its great pixel art, rocking chiptunes, and frantic gameplay, we had no problems recommending The Blocks Cometh in our review from February. As great as the game was though, there were still a few issues. Our major complaint was the difficulty, and it seemed that no matter how large our own Brad Nicholson’s muscles grew, he just couldn’t do very well in the game. There was also a substantial group of people in our forums and elsewhere who were calling for a landscape mode, since playing The Blocks Cometh in portrait was a pretty cramped experience. 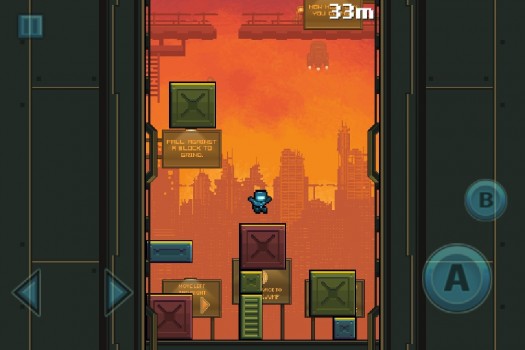 In the just released 1.5 update to the game, Halfbot looks to remedy both of these major complaints, while at the same time adding in a whole bunch of other cool things to boot. Addressing the difficulty is the new Casual mode, which features slower moving blocks and the ability to get squished by blocks 3 times before it causes a game over. In addition to Casual mode, there is now an Arcade mode as well which gives you the benefit of the extra lives but the blocks move at regular speed.

The next big feature in this update is the ability to play in landscape mode at any time simply by turning your device. Landscape mode causes the screen to shrink considerably so as not to cut off any of the same area you would have in portrait mode, but it still remains large enough to play easily and there are nice borders on the sides for the virtual buttons to sit. Landscape definitely offers up a way more comfortable way to play the game. If I had to nitpick something it would be that none of the screens outside the actual gameplay are landscape friendly, but this is an extremely minor annoyance.

Another of the big changes is the addition of an in-game store with two 99¢ in-app purchase options. The first will unlock all 8 additional playable characters in the game, which includes the 4 new ones added in this latest update. Every character can be unlocked normally just by achieving certain goals in the game, but if you’re not patient enough for that sort of thing then the option is there to spend a buck and get them all at once. 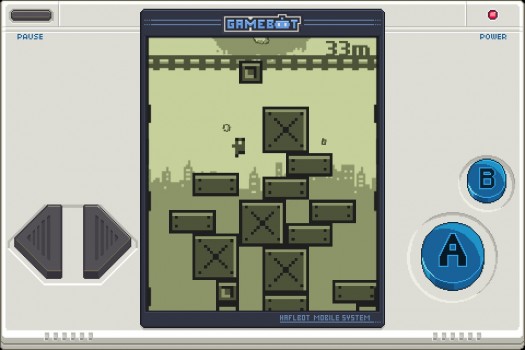 The second IAP is much more interesting. It’s actually a whole new mode called GameBot which gives you a retro Game Boy inspired version of the game. GameBot can only be played in landscape mode, and the outside edges of the screen are mocked up to look like a classic portable system. Gameplay is essentially the same, though it does have a slightly different feel to it and you aren’t able to choose a character. But something about it is just a lot of fun, especially if you ever owned an old handheld like the Game Boy.

The remainder of the update contains 30 Game Center achievements as well as general bug fixes and optimizations. Also, all 4 of the modes that are in the game now each have their own Game Center leaderboard to climb. If you picked up The Blocks Cometh before but couldn’t hang with playing in portrait mode or thought it was too difficult, you should definitely give the updated version another spin. If you’ve been enjoying The Blocks Cometh since the beginning, then there are plenty of goodies in this latest update to keep you further entertained as well.