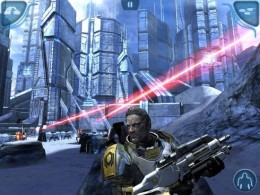 About a week ago, EA announced two potentially hip, upcoming apps for Mass Effect fans with iPads and iPhones. The first was a third-person shooter called Infiltrator. The other was a straight-up companion app dubbed Mass Effect Datapad. One problem: EA didn’t have much to say about the latter title. Like, at all. Talk about a bummer.

We said we’d update you, so here we are. In an interview at the event, Giant Bomb nabbed some details on Datapad from Mass Effect 3 lead writer Mac Walters. In brief, Walters confirmed that it’ll at least carry the game’s codex entries.

WALTERS: Probably the most inclusive thing on the Datapad app is the codex entries, which of course are available in the game. The ones in the game will be tailored to your experience and open up as you play the game. While we wanted to add other ways to access the universe, we didn’t want you to necessarily feel like you HAD to have them. They had to be optional, but they also had to feel useful in their own right, and fun, just like the Infiltrator game, which is amazing.

This series’ codex entries are well produced. In fact, they make you want to hang out with them in a comfortable place, instead of just glancing at them in-between missions and action-y content. If Datapad has a half-way decent UI, it’ll make snuggling up with Mass Effect 3‘s codex, natively, totally possible. We’re stoked.