Lyst Ignition [99¢] from Steel Games is a fascinating – and sometimes frantic – color-matching game which involves tapping little orbs as they descend down the screen. By learning and tapping different combinations of orbs, you can create explosions and other effects. There’s a few rules to learn initially, but the main objective is to destroy orbs of matter.

There’s five types of matter which fall down the screen. Basic matter is the most common and is shown as a black circle, but there’s also orange, blue, critical and multiplier matter. Plus power-ups and “catalysts" appear. A series of interactive tutorials explain how the various types of orb can be combined. This tutorial is totally necessary to understand the game.

The most basic combination involves matching two orbs. By tapping an orange matter and a blue matter, it creates an explosion wherever you tap next.  If the explosion destroys any white orbs of critical matter, it’s worth more points, while destroying a multiplier orb increases your score for that whole explosion. Blowing up matter increases the timer which is always counting down towards zero, at which point the game ends. 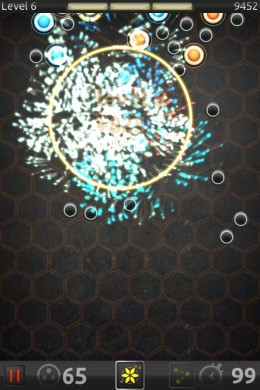 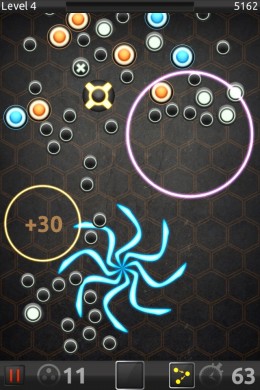 Tapping two matter of the same color generates a vacuum wherever you tap next. This sucks the falling orbs into a cluster, making them a prime target for a high-scoring explosion in your next move. You can match up orbs in quick succession – the moment one match is made, you make another – because new orbs never stop falling down the screen. And they descend faster than I expected, and get faster with each level cleared.

Things get more interesting once you start matching three orbs together. For example, after tapping two orbs as described above, you can tap a Catalyst orb to enhance the effect. This might create a wider or longer lasting vacuum, a larger explosion or a series of explosions.

Two other game elements are power-ups (like a “frost wall" which stops orbs from falling temporarily or “shockwave" which reduces the size of orbs and makes them float upwards) and chain reactions. The chain reaction button creates a series of chained-explosions, destroying all matter in close proximity to the previous explosion, but it takes a while to recharge in between uses.

The strength of Lyst Ignition is that you’re constantly making snap decisions about what to do next. Do you create a vacuum or explosion? Use a power-up or catalyst? And which is the best place to aim the combination to destroy the most high scoring matter orbs? Once you’re familiar with the various orbs you think fast and tap almost non-stop.

I’ve been describing classic mode, but there’s also “Ignition" mode, which features an ‘Ignition Zone’ which grows over time. If a matched color pair fall into that area it increases in size rapidly. Whereas if a mixed color pair fall into the zone, it explodes, detonating nearby matter and preventing you from scoring. A brand new update to Lyst Ignition adds another new game mode, Invasion. Here, invaders will appear and “deactivate" your matter, rendering it useless. You’ll need to use explosions to get rid of these invaders and reactivate the dead matter.

Over time your points earn beakers (like from a science lab). These are used to unlock experiments from the main menu which add additional gameplay features. Each time you choose one new game feature, you rule out another, so you can use this to play around with different strategies. Once you’ve got the maximum number of beakers, you can randomly discover new features as well.

Lyst Ignition does a good job of adding enough unique elements to its matching gameplay that it feels like a fresh entry in the genre, and there is a healthy amount of strategy with how you utilize making matches across the various modes. If you can put in the time to learn its intricacies, Lyst Ignition offers a fun experience if you’re in the mood for a new puzzler.