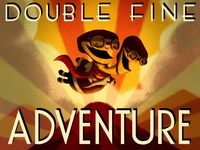 Double Fine’s Double Fine Adventure is doing … OK on the funding front. In the first 24 hours, it shattered all sorts of fun records, including the most funding raised in that period. As of this morning, the studio has gathered 1.7 million dollars in pledges, which is a lot more than the 400,000 bucks it is asking for.

We covered the project because an iOS version seemed like a good possibility. In the original Q&A, Double Fine said Mac and iOS ports are something that it would “love to do" and they were both at “the top of the list for things" if it raised more funds than it asked for. Mission accomplished.

A recent update to that response in the Q&A, however, is decidedly more cautious about the possibility of a Mac or iOS port. “We would love to do both of those things," it says now. “They are at the top of the list for things to do and we’re working to determine whether we will be able to offer them."

This is a subtle change, but an important one. An iOS port sure doesn’t seem as likely as it once did — which you know, was probably the point in fiddling with the wording in the first place. A rep told TouchArcade that an announcement should be coming shortly, and the change was just a new way of telling people that Double Fine is looking into iOS and Mac and pricing a port out.