I have no shame whatsoever in telling you that I was literally obsessed with Myst when it came out in 1993. The mystical adventure that dared me to tumble into an unknown world and explore beautiful oversized tomes to unlock its secrets had everything that I wanted from a game at the time. It gave me a solo adventure, puzzles that were hard as hell to solve, and atmosphere for miles. I just might have played Myst (and all the clones of it) a rather embarrassing number of times.

So, it was really kind of a given that I was going to be thrilled to see The Lost City [99¢], which at a glance seemed to be aimed like a notched arrow at the heart of the Myst-era adventure game lover. Of course, anyone who was with me on the long ride through the adventure clones that Myst spawned knows that there were a handful of decent ones, but mostly many, many bad ones.

I’m quite pleased to report that this is not the case with The Lost City. Far from it, in fact. While the storyline behind the game is not quite as fleshed out as that of Atrus and his wayward sons, Fire Maple Games really nailed it in terms of atmosphere. But even more importantly, they got it right with the puzzles – and added a few extra things that Myst itself could have really benefitted from back in the day. 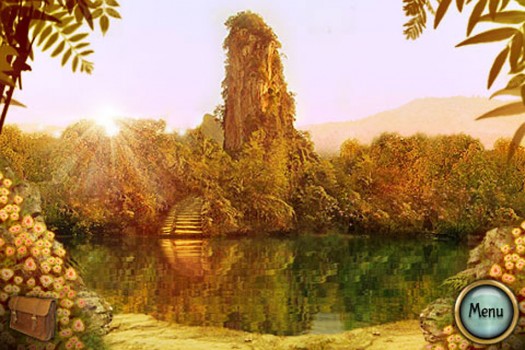 Navigating your way through The Lost City is as simple and pleasant as can be: the touch of a fingertip navigates you through the hidden city your grandmother promised you really did exist (apparently, she wasn’t kidding). Your inventory is neatly tucked into a small briefcase in the bottom left corner of the screen, and touching it pops up a small row of all the items you’ve collected. Items for what? For solving puzzles, of course!

But The Lost City doesn’t do that inane thing where you have to figure out the item that makes the least sense to use, cram it into another item and then use it to magically unlock some door that had no keyhole in the first place. No, these puzzles actually make sense, which as anyone who ever played a Kemco adventure game back in the NES days can tell you, was rarely the case.

Speaking of things that adventure games should have thought of a long time ago, another welcome one here is the map. Each scene of the game you encounter is represented by a numbered panel if you hit up the map screen, which you can move around with your fingertip so you can get an overview of the entire area.

You also have a journal which logs important notes you’ll need for future puzzles, and it just so happens to contain (gasp!) a hint guide, so if you get stuck you can consult it. I know, it’s not proper hardcore. And I don’t care, because the days I spent crying and pulling at my hair in front of my computer because I couldn’t solve that one puzzle were so bad that I don’t mind one bit that this game doesn’t want me to go mad with frustration.

One little touch about The Lost City I really adored was the addition of puzzles affected by seasons. You will encounter stone angel statues which you can place a heart item into to change the seasons, which affects which puzzles you have access to solve. This fit in beautifully with the overall coziness of the game, and it simply brought a smile to my face.

In the end, I found myself trying to slow down and simply enjoy being in the game’s atmosphere. I really didn’t want the game to end, and I suppose that’s the best compliment I can give anything I play. If you’ve ever loved an adventure game of the Myst persuasion, then you’re going to love The Lost City. But not because it’s a clone, or even a really good clone. This one’s got a magic that’s all its own.