Ship management and pseudo line-drawing make an appearance in Kavcom Limited’s The Lighthouse HD [$4.99]. Offering a different take on the classic genre, The Lighthouse HD’s great visuals and variety offset some choice design decisions holding the game back from loftier heights.

In The Lighthouse HD, you take the role of an all-seeing lighthouse operator helping ships get across hazardous waters. Tap anywhere on the screen to shine a light on that area. If you shine the light near a ship, it’ll alter direction towards the direction of the light (and will then continue straight on its new path). The game plays somewhat similarly to line drawing games like Harbor Master [$1.99 / HD / Free], with the difference being that you can’t directly alter the course of your ships and instead must use the light to indirectly manage your shipping lanes (rather than drawing routes). 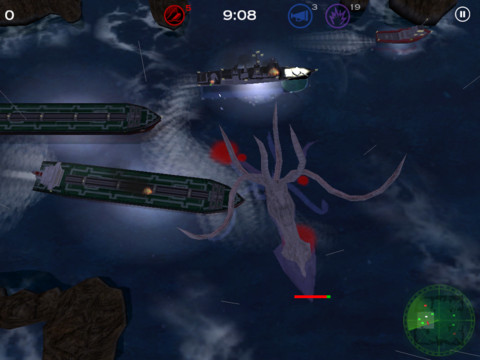 The goal of each mission is to accomplish various objectives (which include goals like getting ships from one point to another and leading fishing boats to giant schools) before losing all your ships. In addition, you’ll encounter barriers such as rolling fog, ship-seeking sharks, and giant krakens looking to trap your ship. As expected, a lot of multitasking, coordination, and precision are required to pass missions and hit the highest scores. Overall gameplay is executed well enough, although I would have liked an option to speed up the map when I’m working with slower boats (considering the game is on a timer, I could see why this wasn’t on the top of the list). 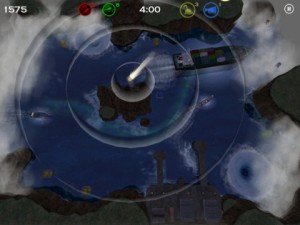 The areas that The Lighthouse HD does a really great job with are its visuals and presentation. The game succeeds in conveying a moody, dark atmosphere at the onset of each mission. Weather effects such as rain, lightning and fog add even more to the general feel of the game, although there were a few times when the various effects made it hard to see some of the baddies swimming underneath the water (call it part of the cruelty of the sea, I suppose). As you get towards the end of each mission, the sun begins to rise, the music starts swelling and the whole map gives off a sense of seeing a light at the end of the proverbial tunnel. I rarely see a game succeed at achieving a play on emotion, but The Lighthouse HD does a good job of getting there.

Unfortunately, there are several areas in The Lighthouse HD that feel rough around the edges. Specifically, the game is filled with a lot of frustrating gameplay nuances that just seem out of place. For example, there are no on-screen notifications when ships are about to come into play on the map. Considering that several levels charge you with taking ships from one end of the map to the other, with both entrances also posing as exists, it can be very frustrating when you get close to an exit and a ship appears out of nowhere and collides with your existing ship, making you lose both in the process. 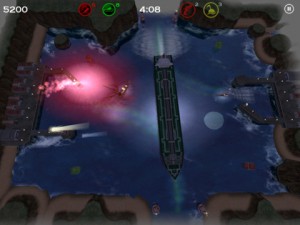 Another example deals with actual gameplay mechanics. One of the items available to you to make guiding ships easier is buoys, which force nearby ships to divert course automatically. The problem is I could never get the buoys to work correctly – I’d place one in a certain location thinking ships would divert one way and they end up going another way. Considering there doesn’t appear to be a way to remove them once they’re placed. This ends up being a waste of resources and can make or break a level.

Another concern is in regards to content. The Lighthouse HD offers 30 total missions, making the game good on content for at least three or four hours (depending on whether you like collecting objective medals). However, I imagine that most gamers will clamor that the game could use more missions, particularly at its current price point. The developer has stated in the forums that additional levels are coming, and I hope they arrive sooner rather than later.

Despite these shortcomings, The Lighthouse HD should appeal to fans of vehicle management games and line-drawers. Its nuanced changes to the standard gameplay and overall visual presentation do a decent job of differentiating itself. Assuming you can get past the relative lack of content and occasional strange gameplay missteps, I’d recommend The Lighthouse HD .