Did you know that penguins spend up to 75% of their time underwater, looking for food in the ocean? Or, if Chillingo’s recent Greedy Penguins [99¢/Lite] is to be believed, they spend 85% of their time on ice floes, waiting for you to feed them, 10% of their time playing guitar and burping, and 5% of their time getting eaten by ravenous Orcas.

Greedy Penguins is a bird-centric physics puzzler (what a concept!) that revolves around you finding ways to get incredibly stressed-out fish in the mouths of the correspondingly-colored penguins. You tap the fish to drop it from its hook and get it rolling, then through a combination of timing and obstacle-clearing, get it to the right-colored penguin. Once your penguin is successfully fed, he coughs up ice cream, which you tap to feed each level’s companion and get bonus points when completing the level, garnering a one, two, or three-fish rating. 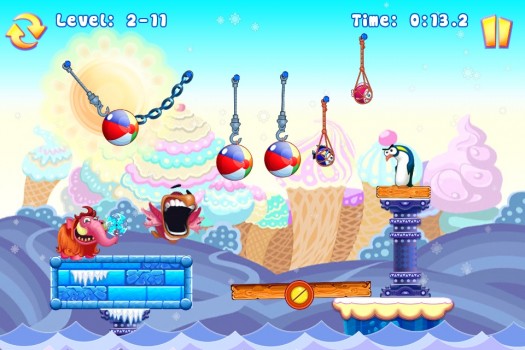 The concept isn’t new, but the execution feels good. I found myself really enjoying this game, as much for the cute graphics and theme as for the well-designed puzzles. While the earlier puzzles seem easy (don’t they always?), once I really got going it became quite challenging to make sure I got the fish moving in order to clear obstacles. I found myself failing some levels multiple times. Since each level is short, I didn’t mind too much, but it did remind me of how bad my timing is (I still get night terrors regarding the Cave of Wonders level from Aladdin for the Sega Genesis).

Another challenge, though one not personally experienced, is that the colors chosen for each penguin and their food make the game exceptionally trying for color blind people. As mentioned in the forum thread, those who can’t see colors will have a heck of a time getting through this game. If you’re persistent and don’t mind some trial-and-error, you might still enjoy it, but as a person who had enough trouble being able to clearly see everything, I would probably recommend skipping it until a color blind option is added.

The other thing that I personally didn’t like was the in-app purchase option. I’m generally of the conservative “in-app purchase?! Not in my paid app!” mindset (I am a bit of an old person, after all), and my thoughts on Greedy Penguins are no different. Simply beating every level in a world isn’t enough to unlock the next set of levels. In order to unlock the second and third igloos (worlds of 12 puzzles each), you need to have either collected thirty fish (out of only thirty-six) or pay 99¢.

The game also encourages you to waste time in levels by tapping the penguins and their companions to make them do “funny animations,” making it unlikely that you’ll get a perfect score of three fish on your first try. Crafty, no? I don’t know about you, but I don’t really like replaying levels of games just to gain points (or fish) in order to unlock content that I feel entitled to, having already purchased the app.

All things considered, Greedy Penguins is a well-crafted – though hardly groundbreaking – puzzle game. It’s fun and extremely well-executed, with enough challenging puzzles to keep you occupied. If you’ve got a dollar or two burning a hole in your pocket, I’d definitely recommend giving it a spin, especially since it’s Universal. If not, well, you can always get your penguin fix from this video!