Way back in 2010 when Monster Dash [$0.99] was released it felt a tiny bit lacking. Not that it wasn’t a fantastic game, but it could have used a little more depth. You know, upgrades to earn, a complex mission system, maybe eventual retina support?

Now there’s no need to worry about any of that. Not because One Epic Game [$0.99] brings any of that to the table, mind, but because Jetpack Joyride [Free] came out a year later and blew its predecessor out of the water. So why is it we’re still seeing retreads of an older, lesser product? Could it be, she wonders, because Grip Games forgot their own game’s roots when bringing it back from PlayStation Minis? 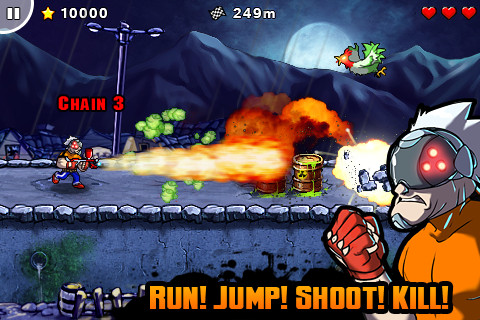 Say it ain’t so, but I can’t see many other explanations for what’s happened here. One Epic Game isn’t a Monster Dash clone, but there are some obvious similarities. To name a few, both have a humorously hardcore hero, randomized levels and weapon drops, the same flavor of non-stop platforming, the same methods of murdering slow-moving enemies, and three-life heart system. Maybe one wasn’t inspired by the other, but that reads like a bit of a stretch. Now, all’s fair in love, war and game development, especially when it comes to making games on different platforms. But if you’re going to bring your game back to compete against its grandaddy, you at least ought to be sure you’ve made a few improvements in the meantime.

Here’s the thing: One Epic Game has more content than Monster Dash. The latter is an endless runner, period. The former has a handful of levels in a story mode and seven challenge modes on top of that. But more isn’t the same as better, and that’s doubly true here. 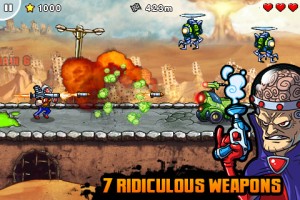 The game is presented as a parody, hanging a lantern on all those silly things we’ve seen in games. It’s the broadest sort of parody, satirizing concepts that are virtually universal. Ha ha, tutorials are a pain, aren’t they? And so many games have zombies, am I right? Look at this obnoxiously jingoistic story, and mock these bland heroes and villains.

But here’s the rub – the story, heroes and villains are extremely bland. The tutorial is horrid. It’s not a great joke when you actually respect your audience so little you feel you have to teach them the ins and outs of the jump and shoot buttons. One makes you jump. The other makes you shoot. Got it? And yes, there are zombies. And aliens. And World War II settings. Hah, I bet you haven’t seen so much of any of those things before that you might actually be profoundly tired of playing games that fail to use them in any sort of interesting way.

Maybe I’m just not getting the joke, but does it extend to clarifying why the rest of the game is so sloppy? The lack of Game Center and Retina support are the biggies, but if you look any deeper it’s just issues all the way down. The game makes due with the bare minimum of animation, for example. Alpha Dog, your musclebound space marine stereotype, has just one: running. Jumping is just the running animation slowed down. The enemies only get to walk (or fly) in a straight line until they fall off something, still walking. Only the weapons and jetpack do anything of note with the visuals.

So it goes with the platforming. The game just loves to screw with you, sticking the best power-up in a place you can’t survive or hiding the fact that a platform is too small to hit until you’re already mid-jump. That’s the joy of intentionally frustrating design, but then occasionally a platform crumbles away before you can reach the end or an obstacle you jump over stretches a little too far to be survivable. It’s sloppy, pure and simple.

One Epic Game has two things over Monster Dash: you can chain kill enemies to build up a score multiplier, and you actually have a score, making killing monsters distinctly more valuable than avoiding them. All other things being equal, maybe that would be enough to set it apart. But all other things aren’t equal, and we’ve had nearly two years to find better endless runners in the interim. There’s just no reason to go back to something that might have been an okay (if slightly familiar) title two years ago when there are so many fantastic games coming out right now. If you decide to take the plunge anyways, share your thoughts in the discussion thread. Just don’t say I didn’t warn you.