Following the port of their 1993 arcade shooter RayForce [$11.99] to the App Store, Taito announced over the weekend that they’ll be bringing another shooter, Darius Burst: Second Prologue, to iOS in the future, according to Andriasang.

Darius Burst was originally a Sony PSP game released in late 2009, and was an official new entry in the fabled Darius series of shmups. An arcade version came a year later called Darius Burst Another Chronicle, and it was especially noteworthy due to its insanely wide screen and cabinet. Sadly, neither game was released outside of Japan. 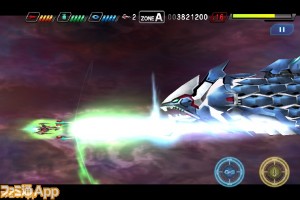 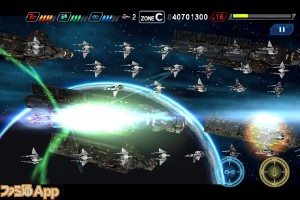 It’s unknown whether the iOS version of Darius Burst is based off of either of the previous versions of the game, but my guess would be that it is an enhanced remake of the original that will have its own special iOS specific features. That’s just wishful speculation on my part, however.

Famitsu’s mobile gaming site originally broke this news and also managed to nab the first screens of Darius Burst: Second Prologue which you see here, but unfortunately there are no other details on the game – like pricing or release date – at this time. After the somewhat controversial launch price for what was a fairly standard port of RayForce, it will also be interesting to see what price Darius Burst clocks in at. Just as soon as we have more news on Darius Burst: Second Prologue, we’ll let you know.