I have a little confession to make: I’m directionally challenged. I know exactly where everything is, but ask me whether you turn right or left to get there and I’ll give you the correct answer about half the time. Not bad for a 50/50 chance, right? Because of this deficiency, Aetherium II [$0.99] has become my new nemesis. I know where I’m going, and I just need to tap one side of the screen or the other to get there, but somehow I still end up smashing into a wall most of the time.

I’ll not hold that against the game. My failings aren’t its failings, though it has several of its own. But man, if you like Snake, there are 100 levels here that will light up all the same bits of your brain, and four modes on top of that to boot.

Although every mode in Aetherium II plays with direction, there are three very different ways to play. You’ve got the main mode (and by far the best), Avoid the Edges, three different Maze modes and First Person, which is quirkier than it is successful. 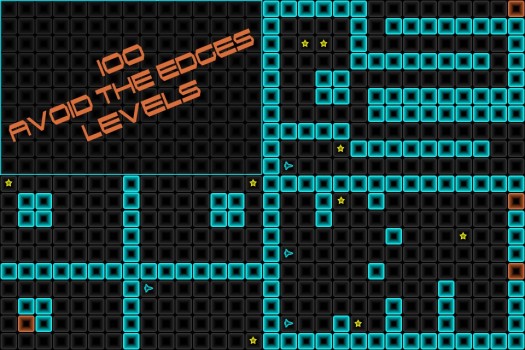 Avoid the Edges is, um, pretty much what it sounds like. The edges are death – they can’t be touched. So you slip around each level avoiding walls and picking up stars, easy enough. But you can only turn left or right, and those directions are always relative while the controls are not. It gets pretty dicey as the passages get more complicated, the corridors get narrower and doors start closing in your face. And that’s before you start controlling two or three ships at once. It’s not all reflexes – later levels are positively puzzling.

The similarly puzzling Maze modes could be great fun, but instead they miss that target completely. Edges are fine, and you can navigate in any direction. The trick is to reach the end, and reach it quickly. The levels get downright huge, but are always contained to a single screen. It’s good, but could be better – the controls are a bona fide pain in the butt. 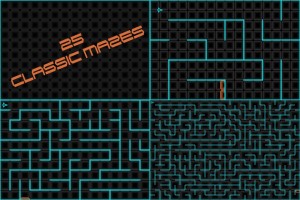 Traveling in all four directions using the edges of the screen is fine, but Aetherium II seems to lack any support for multitouch. So if you want to play with two hands, you’ll need to make certain to lift one finger before putting down another or you’ll careen right into a wall. Not cool, and hopefully fixable. It makes earning full marks for time pretty unlikely.

Otherwise the maze modes could be great. There are three varieties. Classic is as standard a maze as you could find. Tunnels mixes it up with passageways and shortcuts. Doors gives you a series of switches to puzzle through. All good fun.

First Person mode will test your memory and direction sense. Enjoy wandering through a maze of twisty little passages, all alike? You’ll love this. You know the exit of the maze is directly across from where you begin, but not how to get there. If you can manage to keep from getting completely lost, this will be fun. It’s not for me – every level feels like getting lost in the same neon closet – but I can see how enjoyable it could be to build up a map in your mind as you wander each level.

So that’s 200 levels that are mostly great fun, but the trappings that surround them are a little clunky. As I said, the controls are dodgy, and aside from that the menus are awkward and the sound design is pretty terrible unless you’re really into beeping. But more importantly, how do you feel about motivational tricks – achievements, locked levels, and the like? Because you won’t find any of that here. There are leaderboards to climb and stars to collect, but it’s a game built for casual poking around and not dedicated play.

I’ve gotta say, there are great ideas here. Aetherium II is just full of them. But they don’t cohere into any kind of immersive experience. If you want to test your sense of direction, it’s a fantastic game to mess around with. But to commit to? It’s not quite there.