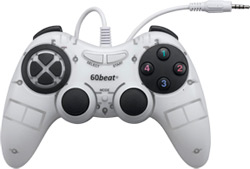 What makes iPad and iPhone cool is that they offer games the Xbox 360s and PSPs of the world straight-up can’t — they allow us to directly interact with games. Touch is an endlessly interesting way to play, and we see some of the most creative games in this space as a whole as a result of this control style.

Some studios, however, aren’t willing to rethink design and offer virtual buttons to compensate for the lack of a physical controller. There’s a lot of these kinds of guys out there, actually, which is probably why we’re seeing a mini-boom in the 3rd party controller market.

The hottest device right now is 60beat’s GamePad. Unlike many other controllers, it requires no technical voodoo. You simply just plug the male end of its luxuriously lengthy cord into your headphone jack, pick the controller in an in-game menu, and then get to work. It’s really that simple; I haven’t had a problem yet. 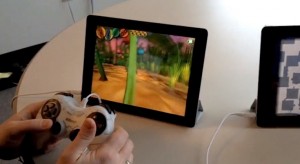 Big is the first thought that hit me when I picked it up, and it turned out that it was a hair too large for me. Remember the “Duke" Xbox controller? The GamePad is much smaller, but the issues it has because of its size are pretty similar. Both are inarguably useable devices, but they’re not the best designed out there.

To get more specific: this thing has huge wings that, to use comfortably, require me to ride up on the neck of the thick plastic and push my outer palms more towards my chest than I’m accustomed to when using a controller. It’s a weird angle — it’s like you’re squeezing, as opposed to relaxing.

A few minutes of play is a valid cure for the initial awkwardness, but the grip I have to use with this thing makes its ten buttons — four shoulders, four face, and two of those useless analog stick shoe-ins — harder to reach than I’d like. I’m also not able to get my hands comfortably perfectly square with the sticks, which is putting some english on my movements. 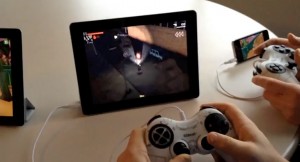 Speaking of buttons, I’m digging the feedback. There’s some meatiness to each and some ideal springiness to the shoulder buttons. The d-pad feels good, too, though I’m sure a purist could find something up with it.

The important thing is that, straight-up, the GamePad works. The response times seem just fine, everything is reasonably reachable, and it adds that real, meaningful layer of tactile feedback to the games. You’ll lose game audio unless you connect a pair of headphones to the splitter the device ships with, but this is a forgivable offense considering the technology at use here.

Also, it makes the games that use it currently — Bugdom 2 and Aftermath — much, much better.

In Bugdom, for example, the GamePad eliminates all the dirty UI elements and allows you to play much like you would any other 3D platforming game. It fleshes out the nuance of specific points of design. Like, for example, the hovering mechanic. Also, it gives you significantly more control over the character, which makes touch jumps easier.

The latter applies to Aftermath. With the GamePad, it’s much easier to move and do the things you want to do. Interestingly, the guys behind Aftermath tied camera controls to the face buttons, which caters to its run-and-gun, corridor style of play.

The GamePad might be bulkier than I’d like, but it gets the job done. The bonus here is that it obviously has an ability to make gameplay more potent. Developers will need to work with 60beat in order to get this controller in their games, though, so the future is as up in the air as our recommendation. If you start seeing a bunch of titles with compatibility, this might be something to spring on.