Justin Smith from Captain Games is probably most widely known for sparking off the Enviro-Bear 2010 phenomenon of 2009. The world’s first bear driving a car simulator made a huge splash on the App Store, and proved that beyond the surface of MS Paint quality visuals and purposely awkward control schemes could lie a surprising amount of depth and replay value. Also, you play as a bear driving a car through a forest. Not every video game lets you do that.

Those same principles of low-fidelity visuals, unwieldy controls, and high playability carried through to his next iOS release So Long, Oregon! [$1.99], and they are ever-present in his latest bit of zaniness know as Justin Smith’s Realistic Summer Sports Simulator [99¢]. Don’t let the ironic title fool you, there is absolutely nothing realistic about Summer Sports Simulator. In fact, it’s greatest attraction is just how NOT realistic it portrays the various Olympic-style events it contains.

Your job is to pick a fictional country and compete in up to 14 events against three other fictional countries to see who can win the most gold medals. The events themselves are simplistic 2D affairs that are what you might have expected to find in an Olympics game for the Atari 2600 in the early 80s. Pretty standard retro-inspired stuff, but where things start to get really Enviro-Bear-y is in how you control your athletes. 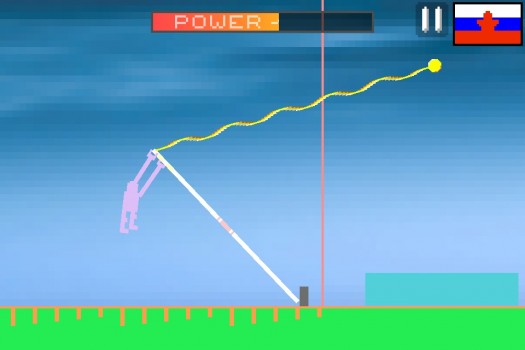 Rather than traditional controls featuring d-pads and buttons, you’ll direct your athletes in Summer Sports Simulator with a spring attached to their bodies (and sometimes, the athletic equipment itself). So for example, to run the 100 meter dash you’ll touch the runner directly and drag him down the track by his springy attached string, over and over, as he clumsily tumbles, cartwheels, and flies towards the finish line.

I just cannot stress enough how terribly awkward this is, and yet, it totally works. Plus, it’s downright hilarious at times watching your blocky athlete stiffly flop around the screen. I’ve easily had more laugh out loud moments with Summer Sports Simulator in the past week than I have with any other game, book, or movie this past year. It’s the game I immediately gravitate to on my springboard when I know I need instant fun and a hearty chuckle, and so far it hasn’t disappointed once. 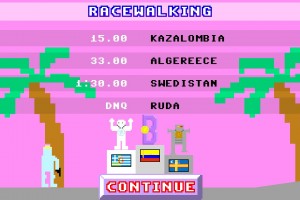 So while the simplicity and absurdity of Summer Sports Simulator come together to create a fun experience, the game does lack a sense of direction that holds it back a bit. There’s no persistent player data, so each time you start up the game you begin as a new random country. It would be cool if you could pick your own country to play as every time where it kept careful track of all your stats and high scores.

For such a high score focused game, some persistent game save tracking is essential to keep me coming back to play. On that same note, an online network like Game Center would be great to compete against the scores of other players around the world. Based on the developer’s comments in our forums, it looks like more country customization options and better high score tracking will be coming in future updates. Right now, although still incredibly fun, the entire affair feels a bit too much like a one-off arcade experience each time you play.

Finally, I’m not a huge fan of the pay model used in Summer Sports Simulator. The initial game costs 99¢ and comes with 4 events, and 10 more events can be unlocked via a $1.99 IAP. I definitely feel like the entire package is worth the $3 you’ll end up spending to get the whole thing, but with such a “love it or hate it” type of gameplay I think it would have been beneficial to let players try out those initial 4 events for free, to make sure it’s something that would suit them. Lowering the barrier of entry for a game like this is important, and I’m not so sure how many people will be willing to pay a dollar to try out what essentially feels like a set of demo events.

Despite my minor complaints though, Justin Smith’s Realistic Summer Sports Simulator is some of the most fun I’ve had with an iOS game in recent memory. It’s the perfect game to jump into and play around with in short bursts, or focus hours of your attention on trying to earn high scores. The complete lack of instructions on how to complete the events is part of its charm, as it’s actually fun to experiment with different techniques trying to find the best one for each event.

I’ve also dumped an embarrassing amount of time into playing around with the interactive torch lighting ceremony before your events begin, or the medal ceremony at the end where it rains hundreds of medals on the athletes which you can fling around the screen. There’s no gameplay benefit to these things, but they’re the type of silly little details that I love. Seriously, I can’t think of any other game that let’s you grab a jet out of the sky by its rainbow contrail and spin and flick it around to your heart’s content.

If you don’t mind dropping a dollar to see what it’s all about, Summer Sports Simulator offers a deceptive amount of depth and playability. It won’t be everyone’s cup of tea, but if it clicks for you then you likely won’t hesitate in dropping an extra couple of dollars to unlock all the events. If a couple of future updates can tighten up the experience with persistent profile saves and online scoring features, then Justin Smith’s Realistic Summer Sports Simulator will end up living a long happy life on my springboard right next to its brother Enviro-Bear 2010.