I adore tower defense titles, but they tend to be just a bit samey. More than most genres, they rely on a number of standard elements that are rarely done without. Kingdom Rush [$2.99] isn’t a mold-breaking game. There are towers, yes, and upgrades and creeps. There is a set path, there are levels. Sometimes the creeps fly. Sometimes there are bosses. You really ought to know all this by now.

Despite the familiarity of its formula, though, Kingdom Rush is absolutely fabulous. With good-natured charm, with clarity of purpose, and with a touch of clever design, this game makes a place for itself in its crowded genre. It’s no wonder Ironhide Games Studio’s original Flash version is so very popular (a Flash version you can play right here, minus the premium content included in the iOS port).

You won’t be surprised if I tell you that Kingdom Rush takes place in a medieval setting. You might also recognize its four basic tower types: arrow towers, magic towers, artillery towers and defense towers. Those don’t seem like much, but there’s a method to that scarcity. After the first few upgrades, you can choose between two specialized towers, and each of those specializations has further upgrades and customizations. That’s where you’ll create the missing classics, like snare and lightning towers. 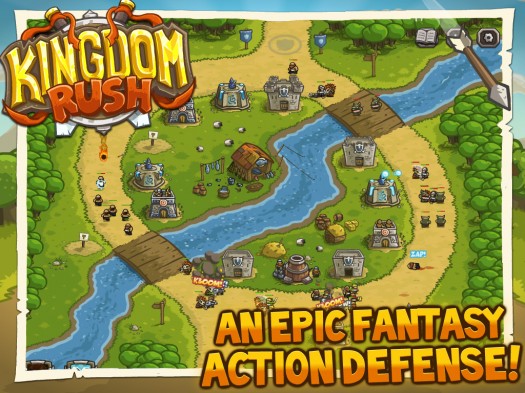 This is just one of the low-key ways Kingdom Rush presents its surprisingly broad collection of choices. On the micro level, you choose which position to place your tower in, and which way to upgrade it. On the macro level, you can choose difficulty, passive upgrade paths, and a couple bonus game modes per map. The game rarely feels prescriptive. No upgrade is really wrong (though it may be strategically unsound), every mode is rewarding, and your choice of difficulty never punishes you. How refreshing. 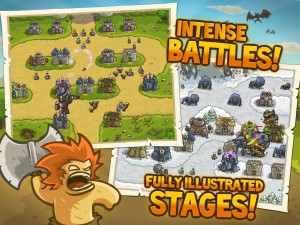 While the presentation might be chill, don’t expect that means Kingdom Rush will be an entirely casual experience. For one thing, this game sticks close to its browser-based roots, avoiding five-minute matches tuned for mobile players. Expect each level to take time, up to twenty minutes or more, especially as you approach the end of the main game’s 13 levels.

There were times this left me wishing for a fast-forward button, one of the few missing genre conventions. But those moments were rare, because Kingdom Rush demands players stay on their toes. In addition to the normal tower defense duties – building towers, upgrading them, praying a creep will get hit just once more before it crosses the finish line – players are granted two cooldown-based abilities that can be used freely. One is a meteor strike from the skies that will damage any creeps it hits. The other brings out reinforcements wherever you tap. Aside from positioning your towers well, this is the main way to strategically influence your success.

Whether you’ll find these useful will depend on your play style, but I’ll hazard a suggestion that the game will be quite difficult without them. Well-upgraded, they can easily make or break a challenging level, and most of the levels are really quite challenging. While I very rarely failed a level, earning three stars was nearly always rough. And without all the stars, you won’t be able to unlock all the passive upgrades for your various towers and abilities. It’s a welcome challenge, no matter how thoroughly I’ve been conditioned by iOS games to consider a failure after 20 minutes of playing an unforgivable waste of time. 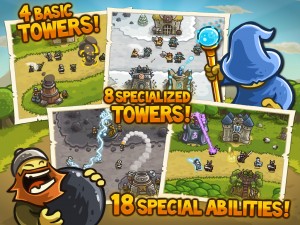 That’s not to say there are no real issues with Kingdom Rush. There’s no Game Center integration until an upcoming update, so you’ll have to make due with the in-game achievement system for now. There’s also an outstanding save corruption bug (don’t close the game while the new level animation is playing on the map), but that should be resolved just as soon as the current update is approved. The only serious trouble I had was with some rather imprecise tapping.

Most of the game doesn’t require precision, so this is often forgiveable. But when you call down meteors they always hit just a little too far south of your tap. They’re on a long cooldown and are generally only pulled out when badly needed, so this can be frustrating. Worse, the final boss battle includes many sections that require rapid taps, leading to some really inconvenient mistaps, and potentially, mis-upgrades. It’s by no means game breaking, but it’s an annoyance nonetheless.

Overall, however, Kingdom Rush is a fantastic package. It’s a game that made me take notice, that made a well-trod genre seem a bit fresher and more interesting than it’s been in a while. Its presentation is top notch, too. Most units have vocalizations like “Freedom!" or “Reinforcements!," and while by all rights this should be annoying, I found it a welcome accompaniment alongside the martial soundtrack. It’s an understated charm that’s found throughout the game, in its art, interface, and imaginative encounters.

If you enjoy tower defense, you absolutely must give Kingdom Rush a try. It doesn’t stray far from anything one might expect from an “epic fantasy" tower defense title, but everything it does, it does with style. You’ll be setting yourself up for hours of awesome, strategic tower defense gaming, so don’t skip this one. And if you’d like a little company on your journey, stop by our discussion thread.