We’re certainly no strangers to Glu’s action-oriented freemium model and, whether you love it or hate it, Frontline Commando [Free] looks to follow a very similar format. Sporting great visuals, tons of content and a decent control system, this third-person cover shooter certainly has some positives going for it. However, its freemium system, along with a lack of gameplay variety, may be enough for some to simply pass on it.

Like a lot of other war-themed shooters, Frontline Commando places you in the role of a soldier stranded in the middle of a battle zone with the goal of single-handedly taking down all the enemy forces out to get you. You’ll complete this daunting task through various missions with objectives that include Elimination (kill all the baddies), Survival (kill all the baddies until time runs out) and Rescue (kill everyone but the civilians).

Successful missions reward ‘war cash’ that can be used to buy some of the available weapons. An experience system also serves as a barrier to picking up stronger weapons until you earn the requisite amount of experience by playing missions. The story is nonexistent and the general presentation doesn’t offer anything new, but at least it doesn’t detract from the experience. 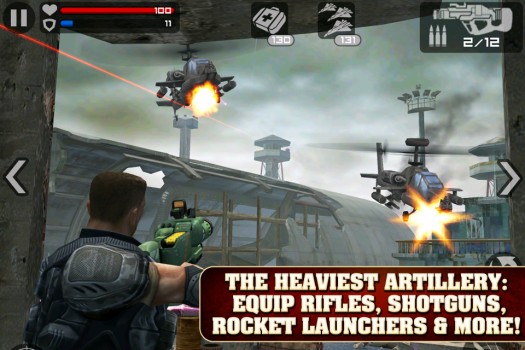 One area that Frontline Commando excels is its graphics engine. Environments look great on the latest iOS hardware, and the game plays smooth and at a fast framerate. Your character’s model also looks decent, although the enemy ones not so much (they shouldn’t last very long on the screen anyways). It’s not the best looking game we’ve seen on iOS, but Frontline still does a great job showcasing its visuals and graphical effects.

Another good point is its control system, which doesn’t impose unnecessary constraints on the player and actually offers enough precision and smoothness to execute headshots with ease. It may seem like a simple point, but so many shooters botch up the aiming system that it’s worth mentioning when done correctly.

As a cover shooter, Frontline Commando drastically limits what you can actually do in each mission, thus restricting the overall gameplay. As one can imagine, staying under cover is the key to survival as you poke out and take potshots at the opposing forces. Typically, each environment will have several cover points you can run to, with one of them also doubling as the ammo station. Stay under cover in the same place long enough, and the enemy will actually chip away at your cover point, forcing you to either relocate or begin taking damage from errant shots. 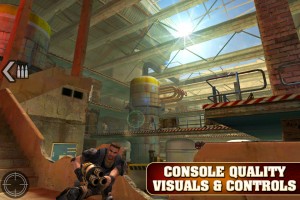 It’s important to note that you don’t actually have direct control over your character – your sole control choices are moving from cover point to cover point (with pre-done animations), moving in/out of cover, and aiming your weapon. Folks looking for an actual third person shooter with free movement are not going to find that here. Still, Frontline Commando manages to implement its own gameplay with little hiccup.

Freemium comes into play in Frontline Commando with the standard dual-currency model of progression. In addition to the war bucks mentioned above, there is also gold, which is the premium currency and can be purchased using IAP (and consequently converted to war bucks if needed). Like Gun Bros, there are a wide variety of weapons, armor, and items that can be purchased either with war bucks or with gold.

As is the standard with these types of games, you’ll quickly discover that the best weapons are those that can only be exclusively purchased with gold (and will cost more than you’ll ever earn without IAP to boot). Sure, there are tons of weapons that can purchased with war bucks, but there will always be something better that’ll require some cash. Combine this with the occasional hard mission, and you’ll find yourself wanting to pick up some of those premium weapons just to scrape by. This is certainly not a new issue with the freemium model, but I feel compelled to mention it whenever it’s encountered.

The main problem I have with Frontline Commando is that, when all is said and done, there’s not enough variety to keep me coming back. The different locales you eventually unlock are nice, and the different weapons provide some small changes in strategy, but the core gameplay is still the same and hardly changes.

In addition, the freemium elements make it unnecessarily hard to pick up new weapons (which are your only hope for some variability). If the game progressed using a normal non-freemium pace, then I think Frontline Commando would work a bit better from a gameplay perspective. However, with the grind currently the way it is, the lack of variety really seems to stand out.

In the end, your likelihood of having a great time with Frontline Commando is directly proportional to your opinion of freemium elements in action games. There’s nothing inherently wrong with Frontline; it’s just that games based on free-to-play economies tend to become long and drawn out (if you don’t pay), which tends to introduce the issues I mentioned above.

Regardless, if you don’t mind the grind and are willing to put forth lots of time (or money) to progress, then Frontline Commando is a good game to check out. However, if you have an issue with freemium or you’re looking for a game with a bit more variety, then I’d recommend giving it a pass.