You guys, I had the Worst Christmas Ever this year. No, it’s not because I didn’t get an iPad 2 – I mean, it’s pretty much a job requirement for me to be set in that department – so my (ex-) friends and (former) loved ones are off the hook for that. No, what I can’t get over is the fact that Santa did not leave me a puppy this year. Seriously, I blew up Twitter for weeks with links to dog videos and pet adoption websites and no one picked up on the hints? Collective friends and family, you are dead to me.

Luckily, RagTag Studio’s Puppy Panic [$.99] is here to numb my pain. A cute, well-made endless runner, Puppy Panic helped take my mind off of the callousness of those most dear to me by presenting me with a stable of eight (nine, if you count the secret one) puppies for me to race and play with. Each puppy has special abilities unique to their breed that help it in various ways throughout the game’s two modes. When you start with the Beagle, for example, you can double-jump really high, and when you get the Eskimo, you can bark and clear all the obstacles from your path. 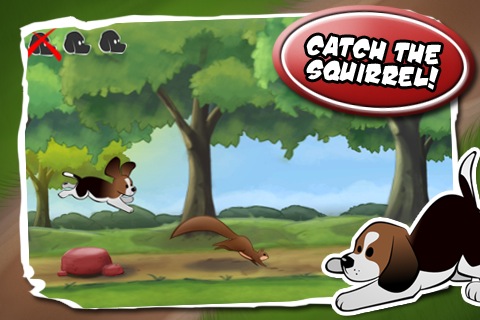 The games themselves are pretty much the same, with slight variations. In Squirrel Chase, your puppy chases a squirrel and must dodge bouncy red balls, jump over tree stumps and duck under low-flying birds in order to catch up with it. In Cloud Surfing, your puppy has to bounce along on clouds to catch up to an airplane while avoiding falling through the clouds or running into birds. (Dog LSD may or may not be involved.) Beating both game types with a puppy breed unlocks endless mode for that puppy, meaning you can continuously chase squirrels or airplanes (which I’m pretty sure my existing dog dreams about on a daily basis).

OK, here it is. In case your parents never told you where puppies came from, Puppy Panic blows the lid right off that secret—they come from vending machines, duh! But, like, really big vending machines that only take puppy coins, which you earn through successfully passing trials with your first puppy. You get your first puppy handed to you by the game, presumably because the prior owner of the puppy coin was already losing his or her mind due to the alarmingly large number of puppies the game gives you, and the thought of getting one more out of the vending machine would have driven them to adorable, floppy-eared suicide.

Despite the overall adorableness of the game, there are improvements I would definitely like to see made. While the two game types are solid and well-designed, I would love to see more made available in future updates. The same two games, over and over, for all eight puppy types is repetitive, and while playing and beating both game types with each puppy unlocks endless running mode for that particular puppy breed, I couldn’t be bothered with it after a while because it all felt the same.

The special abilities each puppy has, too, are a bit unbalanced. For example, the Corgi’s ability to automatically avoid pretty much all birds (because it has short legs!) made the game too easy for me, whereas the Dalmatian’s ability to call a firetruck to its aid never got used.

Even with these small downsides, Puppy Panic is a fun take on the runner genre. For about a buck, you get pretty much endless entertainment, especially since you can pick your favorite puppy out of eight to customize the playing experience. If you’re a fan of runners in general, this is a really cute, family-friendly option. And you don’t even have to worry about your furniture getting chewed up.