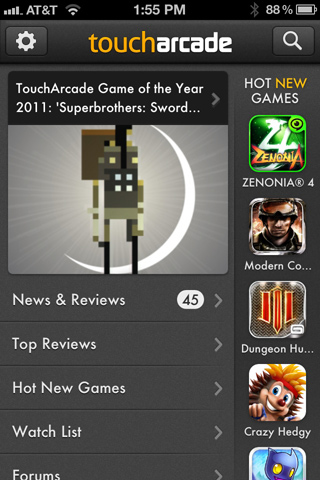 You’re looking at the very first released screenshot of the upcoming TouchArcade app. We’ve been working on this with designer Wolfgang Bartelme and the developers from Flexibits for the better part of 2011.

If everything goes as planned, it should be available in early 2012. As part of running TouchArcade over the last few years, we’ve come up with tons of tricks to take the App Store and distill it down to a manageable amount of great games to check out. The TouchArcade app automates this, and will grant anyone who downloads it instant access to not only every aspect of TouchArcade, but also a listing of hot new games which is constantly updated, 24 hours a day.

It has some other great features as well, but we’ll get in to those as we get closer to actually releasing the app. I’ve been using it over the past few months as it has gotten closer and closer to what it will be like when it’s released, and the app is fantastic. Our goal was to make the ultimate companion app for iOS gamers, and what we’ve got so far has even exceeded even my expectations of what the TouchArcade app should be when I first imagined it.

Stay tuned, 2012 is going to be one hell of a year- And be sure to follow Flexibits on Twitter, as now that the cat is out of the bag they’ll likely be posting updates on the progress of the TouchArcade app.