Living in Southern California, I spend most holidays in front of a space heater watching White Christmas on TV and wishing I was one-half of a musical comedy duo trying to gain the affections of two sisters while saving the inn of my old Army commander.

But more than that, what I want more than anything is the snow that the movie is named for. I sit inside daydreaming about that beautiful, luscious blanket of powder covering the ground (yes, I realized that they probably filmed that movie on a sound stage not far from me, but a girl can dream!) while red-faced children fling snowballs at each other. Alas, as that is unlikely to occur pretty much ever, I’ve been making do with Snow Fight [Free].

Snow Fight is a really fresh-feeling real-time strategy game, a fun re-imagining of Capture the Flag that engages you in wintry warfare against scrappy neighborhood kids in a kind of snow battle royale. The goal is to get to a flag without being taken out by other kids’ snowballs. Additionally, you’ll want to touch snowmen to claim them for your team in order to get a better score. 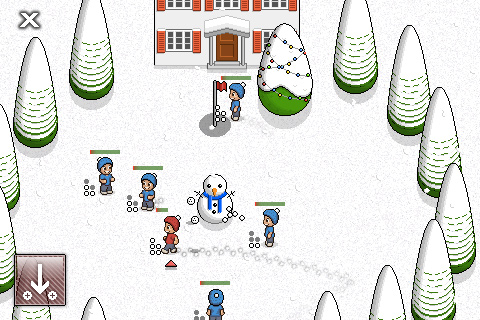 The path is full of obstacles and cover; a strategic duck behind a rock for a quick reload of snowballs (hey, a kid can only carry so many) could make all the difference between capturing the flag and ending up face-first in a pile of snow.

You drag your finger across the screen to move around. You tap on other kids to throw snowballs their direction, but just because you can see them doesn’t mean you can hit them (and there’s no auto-aiming; learned that one the hard way when I was haphazardly tapping all over the place). Likewise, they might be able to see you well enough to start chucking snowballs at you, but if you’re smart you’ll be out of their reach.

There’s also a ducking mechanic that slightly helps you avoid being hit while you’re behind cover, but most importantly ducking enables you to make more snowballs and continue the fight.

There’s not much to dislike about this one. My major complaint is that playing on the iPhone or iPod touch, the screen can often feel too small for delicate drawing operations. This becomes a particular problem as you advance to some of the higher levels, though it can be worked around (or may not be an issue at all, if you don’t have giant sausage appendages).

Even the in-app purchase on Snow Fight isn’t annoying. The game itself is free, and you can unlock levels the normal way by finishing the previous level without dying, but there is also a really handy option to unlock every level for $.99. With over forty levels as-is, and the developer mentioning the possibility of adding more levels after the new year in our forum thread, that $.99 could end up going a long way.

Even if you’re lucky enough to live in a Currier and Ives-esque winter wonderland, you’ll find Snow Fight hard to put down. And it’s free, so it’s a perfect treat for yourself if you’ve spent way too much money buying your family lovely gifts for the holidays…or, you know, if you spent your last paycheck buying one of those giant Hickory Farms summer sausages, a box of wine and Twilight DVDs (SHUT UP).