Last week when we learned the classic laser disc arcade game Mad Dog McCree [$4.99] was coming to the App Store, I was stoked. I had fond memories of gunslinging at that giant arcade cabinet as a kid, and figured reliving the experience on my small touch screen device would give me that great shot of nostalgia that I’ve been fortunate enough to encounter often on the App Store. Then I actually fired up the iOS version, and learned once again that nostalgia is a fickle beast.

Mad Dog McCree has not aged well, and I’m not so sure it was ever a very good game to begin with. With a certain part of the video game spectrum always striving for the most realistic visuals possible, and the introduction of disc-based storage in gaming which started becoming prevalent in the late 80s and early 90s, mankind embarked on one of its most hideous inventions of all time – full-motion video games. What could be more real than actual real-life video footage?! It was THE FUTURE. 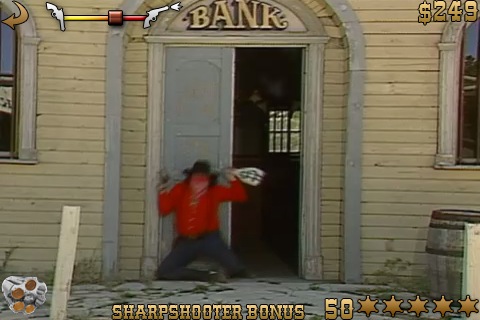 Unfortunately, the biggest drawback to full-motion video is that it’s extremely linear. Rather than an artificial world which you built from the ground up and could manipulate in an infinite amount of ways, you had to plan ahead for what could happen and then produce those results on film, limiting the level of variety in the game. As such, games like Mad Dog McCree allowed very little player interaction or variation.

My 9 year old me didn’t care about these things, though. All I knew is that I could point a big plastic revolver at cowboy outlaws on a massive screen and they would react to me shooting them. Crazy stuff. That also brings up one major point of contention with the iOS version of Mad Dog McCree – there’s no light gun. This sort of takes away a huge part of the appeal of a game like this, however, I actually found the tap-to-shoot mechanic on the touch screen to work just fine and I didn’t end up feeling like I was missing out by not having a gun peripheral. 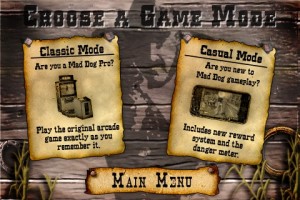 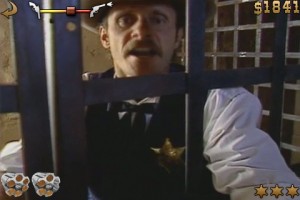 As for how well the rest of the game translates, the port itself is very good. The video sequences look good enough, though obviously lightyears away from the high definition visuals we’re all accustomed to nowadays. Aside from the natural old-school look of a 20+ year old title, the menus and interface in the iOS version are really quite ugly. They look especially jagged and blurry on Retina Display devices, and could use a high resolution upgrade. It’s a pretty minor thing, but it sticks out.

Gameplay comes in an original Arcade mode and a new, easier Casual mode. Truthfully, both of them are stupid hard. Mad Dog McCree requires lightning quick reaction times and good memorization of how the levels play out in order to be successful. Enemies can be hard to see in the environment, so tremendous amounts of trial-and-error are necessary to learn the ins and outs of each level. In the iOS version, it’s easy to skip cutscenes and retry sections quickly, and the ability to quit and continue where you left off makes actually completing the game a more realistic endeavor (not to mention, at $1 a pop in the arcades if memory serves me correctly, a whole lot cheaper). 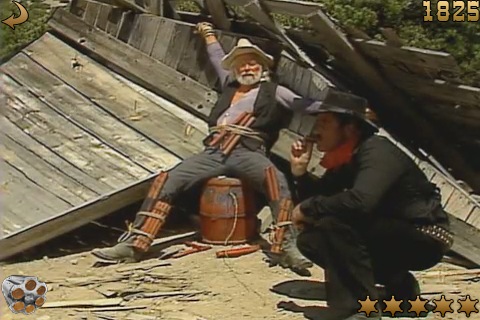 Mad Dog McCree is the product of a FMV era that was light on gameplay and heavy on the “omg look the graphics are actual people!", but it’s definitely earned its spot in gaming history. The iOS port is really pretty good, and whether or not you should pick it up will ultimately come down to if you actually enjoyed the original game or if you just remember it through the rose-colored glasses of a 9 year old, like me. Strangely, as shallow and frustrating as the game is, I find myself going back to it over and over again. For some reason I really want to see it through, most likely because I never would have been able to as a kid in the arcade.

I don’t think it’s as fun as other iOS laserdisc ports like Road Blaster [$4.99/HD] and Cobra Command [$6.99], but Mad Dog McCree does a solid job at translating the gunslinging action of the arcade original to the touchscreen of iOS. If you’re a fan of the source material, then you should be pretty satisfied with this port.