Bejeweled Blitz [Free], now a Universal app for iPhone and iPad, is a stellar game. It takes the glorious match-three mechanic of the classic puzzle franchise, pumps up the volume on the jewel and match bonuses, and then condenses it all down into frantic, one-minute bursts of eye-gasmic, point-laden play.

Do you know a dude who hasn’t see Bejeweled yet? At this point, I’m pretty sure that the only people who aren’t into Bejeweled don’t have computers or phones, which pretty much eliminates them from reading this web site. So, I feel like there isn’t much need to go on and on about how the match-three mechanic works or what makes Bejeweled feel good.

Let’s talk about what’s more relevent: what Blitz does differently. 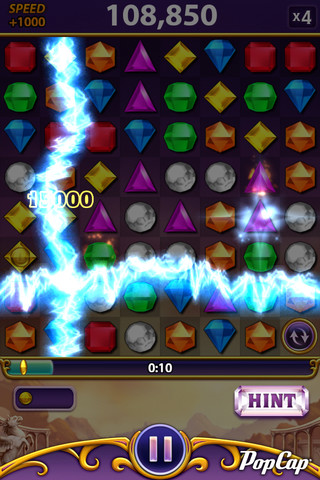 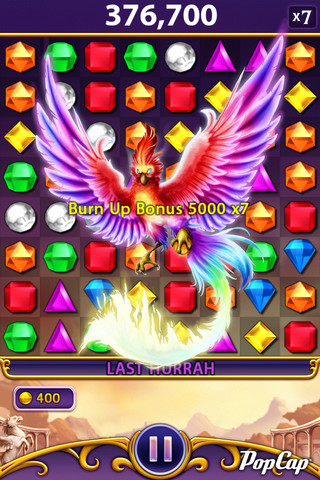 In brief, Blitz is a super breezy and pyrotechnic take on the classic formula. Each session ends at the 60 second mark, and the goal is to score more points than people on your Facebook friends list.

What’s remarkable is how well the game supports its structure; all the high-toned sounds and explosive colors feed into the dizzying time limit, reinforcing a sense of momentum that the other versions of Bejeweled straight-up don’t have. Similarly, the off-the-wall points system bolsters the high-score aspect of the experience by giving you tons of opportunities to score ludicrous amounts of points.

Needless to say, the game part feels good as always, and the new aspects Blitz brings out in Bejeweled are solid and good, too.

Blitz has some other stuff. While not having Game Center to connect with friends and see their high scores, it does support Facebook — and superbly at that superbly. From in-game, you’ll see your friends Facebook scores or even app scores as naturally as you’d expect. It even talks to the Facebook app. 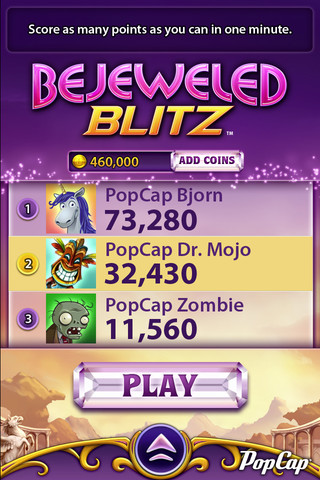 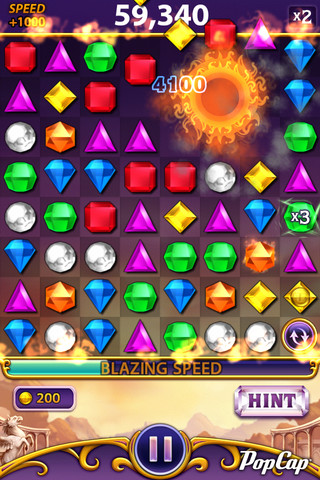 There are also some fun extra elements on the puzzle side that connect to a free-to-play or in-game currency system. Before each match, you can bring in different, multiple use abilities to change up the match. For example, there’s a whirlwind power that rotates the board. This is purchased with credits that you earn in matches and can, of course, buy via IAP. I think you’ve got to be really, really dedicated to earn enough to bring these (awesome) abilities into each match, so be aware that the F2P element will always be winking at you.

So, yeah, Bejeweled Blitz is what it says it is, and it’s smart about the whole “blitz" part, integrating some new elements while allowing the same core play to shine. While I’d love to see some official iOS Game Center love, the Facebook stuff is sharp enough to support the entire structure. Convince some friends to jump in and I think you’ll have a good time.