We’ve been keeping tabs on Paradox Interactive’s Defenders of Ardania [$4.99 / Free] since its initial unveiling way back in February. While Defenders boasts beautiful artwork and a decent amount of content (including multiplayer), the majority of attention is centered on its gameplay, which attempts to move beyond the typical tower defense experience with some new and interesting ideas. Overall, despite some minor concerns with the UI and other areas, Defenders of Ardania is an excellent addition to the tower defense genre and is a must-try for any fan.

One of the first things you’ll notice when playing are the gorgeous visuals. The artwork showcases a variety of fantastical locales and certainly looks as if the developers paid extra attention to setting the scene for the entirety of the campaign. The actual units and towers look a little out of place, but I think that’s mostly a credit to the attention paid to the backdrops. Of course, heightened visuals aren’t going to necessarily make or break a tower defense game, but well done efforts deserve credit nonetheless. 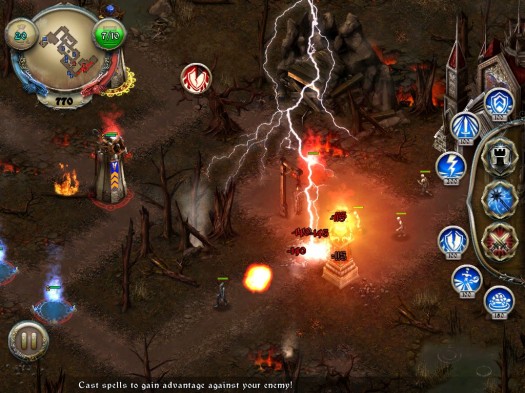 Gameplay-wise, take a glance at some of its screenshots and Defenders of Ardania may look like just another tower defense game. However, actually fire up the game and you’ll discover that it offers quite a bit more depth than most TD games. For starters, Defenders combines the gameplay elements of both the tower defense and real-time strategy genres.

Like tower defense, players must strategically place towers of various strengths and abilities onto the battlefield in order to take out the oncoming hordes of enemies looking to attack your base. There’s tower upgrades, resource management and a wide variety of enemies, including baddies that can fire at your towers and destroy them if you don’t repair in time. Taken simply with these gameplay elements, Defenders of Ardania would have been a standard, decent TD game. 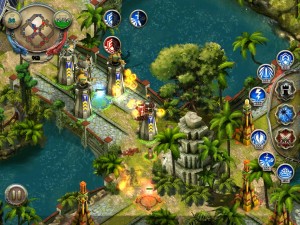 Add in what we’re calling ‘Tower Offense’ elements, and Defenders quickly turns into a game about extensive resource management and striking the all-important balance between multitasking both offense and defense. In addition to guarding your own keep from the enemy throngs, you must also send out your own units against the enemy’s towers in order to take down the opposing strongholds.

Furthermore, the more units you send out, the more ‘experience’ that unit earns until it upgrades, giving it a nice stat boost. Later campaign missions up the ante with having multiple enemy keeps, forcing you to defend and attack on multiple fronts. Finally, Defenders also has a magic system allowing players to expend resources on spells ranging from defensive and offensive buffs to enemy unit slowdown. 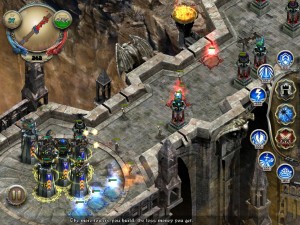 All these gameplay elements lead to a lot of different strategies that can be employed while playing Defenders of Ardania. The goal of each mission is to destroy all the enemy forts, so obviously you’ll need to pay attention to your offensive forces and decide whether to attempt to brute force the enemy with tons of units or launch a varied team of units to try and stymie the opposing towers. However, the game ends if the enemy takes your own keep, so you’ll have to make sure your defensive towers are well placed and upgraded.

In addition, towers, units, and magic all use the same resource, so your biggest task will be balancing your allocation of currency. This all sounds like a lot of information to work with but Defenders does an excellent job managing all the pieces and tying it all together in a way that just works. In fact, the only complaint I could really foresee with this sort of gameplay is the length of time entrenched battles might take, but I think that’s just part of the strategy.

While the game does a lot of things right, Defenders of Ardania does have a few small issues, particularly with its UI and introductory segments. For example, I would have really liked an actual tutorial level, rather than the static help screens currently serving as the ‘tutorial.’ It certainly would have helped newcomers looking to jump in the game fast and having no idea what to do. In addition, the lack of difficulty options may stonewall some players as they get further into the campaign.

Also, while Defenders does feature a tower defense only gameplay mode, it lacks a lot of the niceties of most tower defense games, such as a fast forward button and difficulty levels, making the mode too easy and very slow. One last complaint is with Defenders’ Game Center oriented multiplayer mode which is pretty fun, assuming you can actually get a game started (I had quite a few errors trying to set up matches). Granted, most of these issues are relatively minor and don’t detract from the overall single player experience, and will more than likely get sorted out in future updates.

If you’re a fan of tower defense games (and have an iPad), you need to stop reading this review and just check out Defenders of Ardania. It’s simply a well done game that merges established gameplay elements with good new strategic twists all wrapped up in a visually appealing title. Even if you’re on the fence, you should at least check out the lite version and see if the tower offense pieces suit your fancy. Either way, it’s nice to see advancements made in the area of TD games, and I hope this is a sign of more innovation to come.