Earlier this week, Warner Bros. and Mortal Kombat developer NeatherRealm Studios surprised everybody by dropping Batman Arkham City Lockdown [$5.99], an iOS spinoff of the critically acclaimed console series, into the App Store. Batman Arkham City Lockdown is a streamlined take on its console big brother games, placing you in the role of Batman as he faces off against a stable of Gotham City’s infamous villains in one-on-one battles. The presentation and overall “Batman-ness" of the game are absolutely fantastic, and although the combat is a bit rigid and flat, Arkham City Lockdown offers a fun mobile version of The Dark Knight’s superhero escapades.

Immediately upon starting up the game, you’re thrust into a fight with one of the Joker’s thugs which acts as a tutorial in the ways of combat. The controls are fairly straightforward: Tapping the screen allows you to dodge an incoming blow, swiping the screen left or right throws those respective punches, swiping up does an uppercut, and swiping down just when an enemy is about to strike does a deflection move resulting in a dizzied opponent. 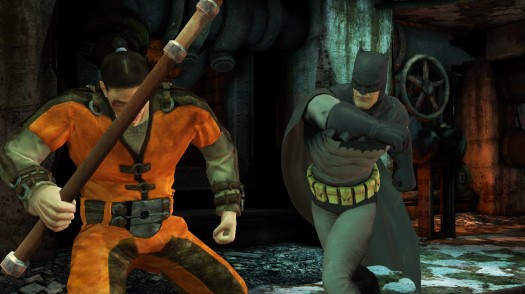 The responsiveness of the controls is pretty good, and it’s easy to piece together some nice combos using the swiping gestures. However, it really just feels like a second rate attempt at Infinity Blade-style combat. A couple of additional elements do spice things up though. There is a counterattack mechanic where tapping circles that pop up on your opponent’s body will result in Batman doing various types of counters, most of which look pretty sweet. The problem with this is that you feel very removed from these moves, as you sit back and merely watch these canned animations after simply tapping some circles. Enemies can also go into a “rage" where your offensive efforts do nothing, and instead you must concentrate on dodging their incoming attacks until they cool down and you can get back to pummeling them in the face.

My main issue with the fighting mechanics is that they really lack depth. Most fights can be easily won by simply timing a deflection, dizzying your opponent, and swiping back and forth furiously to unleash a combo on them. Of course, if you make the effort to mix things up by doing different combos, using your arsenal of special gadgets, and utilizing counterattacks, then you will be rewarded with a better rating and more experience points when the battle is over. But, if you’re stuck on a particularly hard fight, the motivation isn’t really there to prevent you from taking the cheap and formulaic route to a victory. 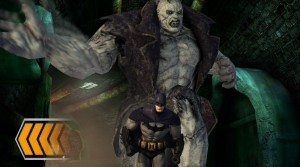 While the actual combat mechanics feel simplistic, Arkham City Lockdown does offer quite a bit in the way of content. After your first tutorial fight, you enter into the Batcave where you can access a map of Gotham City which allows you to choose from a selection of battles. Only a portion of the city is unlocked from the start, with a few entry level fights for you to choose from. Each fight contains multiple opponents that you’ll face off against one right after the other, utilizing the same health meter for all of them to add some challenge. When oh when will villainous thugs learn to all attack at the same time?

After completing each of these battles you’ll unlock the boss battle for that area, the first being Two Face. He’ll send some goons after you at first, and in between bouts a new gameplay element is introduced. When Two Face tries to pop a cap in your behind with his tommy gun, you toss out your trusted Batarang. Here you get a third-person view from right behind the Batarang and you actually control it by tilting, directing it into Two Face and knocking his aim off kilter. As gimmicky as this sounds, I actually thought it was a pretty cool little diversion from the regular fisticuff action. After tearing through the thugs and tossing a few Batarangs, you’ll square off against the man himself, Two Face. 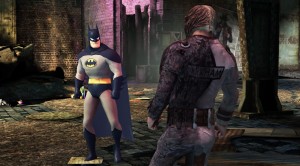 The first boss battle with Two Face is tough, and he handily kicked my ass multiple times in a row. This brings me to another aspect to Arkham City Lockdown, the character progression of Batman. Beating up bad guys earns you experience which will level up Batman and his attributes. You can also earn what is called Waynetech points which can be poured into upgrading your various gadgets, armor, combat skills, and more. If you want to speed up the process, you can get additional Waynetech points via in-app purchase, though so far it seems like you’ll naturally earn enough to trick out your Batman adequately during the course of regular play.

Aside from the regular campaign missions and storyline, there’s also some cool extra stuff like unlockable character bios, Batman wallpapers, a viewer for checking out a selection of included Arkham City digital comics, and several additional skins to outfit your Batman in. These can be immediately unlocked via IAP (and they’re all pretty sweet), but unfortunately there’s no way to earn these alternate costumes through normal play, which would have been a cool incentive for playing through the game or accomplishing specific goals.

In the case of Batman Arkham City Lockdown, my feelings towards the game are mixed. I’m not terribly excited over the simplistic fighting mechanics, but I absolutely love the character progressions system and bonus unlockable items. Plus, the combat system did end up growing on me, and as long as you’re not expecting something at the level of Infinity Blade II [$6.99] then you might actually have a good amount of fun making your way through all the fighting missions. Also, the game’s visuals look absolutely fantastic, not surprising given the use of the Unreal Engine. It definitely feels like a very authentic mobile spinoff to the console titles.

Whether or not you should pick up Batman Arkham City Lockdown will likely boil down to what your expectations are from the game. If you want a comparable experience to the console titles that you can carry around in your pocket, then you will probably end up disappointed in this effort. If you want a gorgeous looking Batman title filled with all sorts of nice fan service and simple combat that won’t bust your brain with strategic depth, then Arkham City Lockdown delivers this really well.

It will be cool if the developers support the game post-release, as there are only a few bosses to battle in the game and it all goes by fairly quickly. It’s pretty fun replaying through the game though, especially if you don’t mind forking over some extra cash for the alternate costumes which add a bit of a different experience to additional playthroughs. Overall Batman Arkham City Lockdown is a really well made title that I’ve ended up enjoying more than I initially thought I would, and if you’re a big Batman fan and can accept some of the combat limitations, then it’s definitely worth a look.