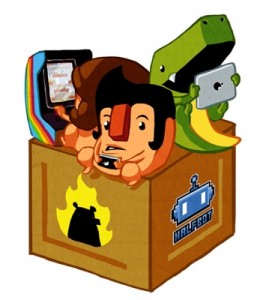 For what seems like forever now, gamers have been clamoring to have the indie arcade platformer Super Crate Box ported over to their beloved iOS devices. And who can blame them, the game is awesome. This past August Vlambeer, the developer of Super Crate Box, made the official announcement that they would indeed be bringing their game to the App Store, with the help of The Blocks Cometh [99¢] developer Halfbot. And there was much rejoicing.

The plan was to have Super Crate Box ready for iOS the following month, but in the world of game development almost nothing ever goes as planned. Yesterday, Vlambeer updated their blog with word that at long last, Super Crate Box for iOS was finished and had been shipped off to Apple for their approval. Again, there was much rejoicing.

Vlambeer goes on to explain that the extended development time was due to tweaking and perfecting the controls. Super Crate Box is an extremely difficult game as is, and requires nothing but the tightest of controls to even begin thinking about being successful. Originally, they thought those types of controls would be completely impossible on a touch screen, but with the help of Halfbot they eventually saw that the kind of precision necessary for their game was indeed a possibility.

What really reassures me, and actually gets me pretty excited, is this quote from Vlambeer: “Super Crate Box is still hard as hell – it’s hard as hell because that’s what Super Crate Box is, not because of the touch controls." Awesome. Halfbot throws out a quick blurb on their own blog about the long-awaited submission to Apple, and they also admit that the additional development time was to make sure the game was “absolutely perfect." With both Vlambeer and Halfbot exuding confidence in Super Crate Box‘s performance on iOS, I’m feeling pretty good about the whole thing myself.

Once Apple gives their blessing to the game, the developers will start discussing pricing and specific release dates. But with all the major hurdles out of the way and the game actually finished and sent off for approval, it likely won’t be long until we’re all punishing ourselves with fun, Super Crate Box style. And that’s something that’s worth rejoicing over.