Did you love shooting galleries as a kid? Ever pretend that you were a Wild West sheriff? Have you ever rationalized killing hundreds of people by pretending that they’re just plywood target practice cutouts? If you answered yes to at least one of the above, you are going to love McGyro [99¢]!

McGyro is a first-person shooter that utilizes your device’s internal gyroscope to aim at bad guys. You play as Sheriff McGyro (originally leading me to hope that this was some kind of Blazing Saddles/MacGyver hybrid; alas, no), a small town Wild West law enforcement officer who can’t handle the idea of killing actual living things, so he envisions them as plywood cutouts instead. (Kind of like when people tell you to imagine the audience is naked before you give a speech, but with more murdering and less nudity.) 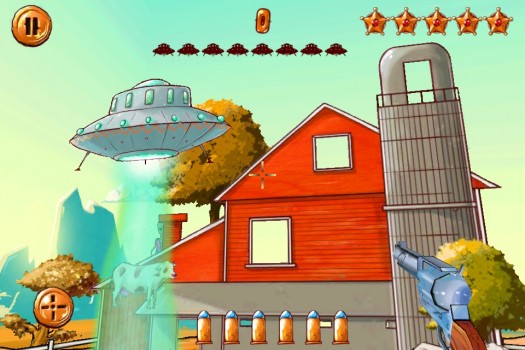 While a solid argument could be made for the case of this dude being some kind of sociopath, the good people of his town somehow justified giving him a gun and tossing him out into the world, despite the fact that he sees everyone as potential targets (even busty saloon girls whom he also appears to be romantically interested in, which does not do much for trying to disprove the theory that he is probably a serial killer).

The whole game feels a lot like a real-life shooting gallery. Bad guys pop up left and right and you have to take them down before they shoot you (OK, not quite like a real shooting gallery in that respect). The game throws additional challenges at you the further you go, such as projectile-flinging enemies and progressively faster-moving targets.

You tilt your screen to aim and tap the bottom right of your screen (where your gun is) to shoot. You automatically reload after six shots, but reloading takes a little time and a poorly-timed reload can give the bad guys enough time to get in a few shots before you can take them down. If you lose all of your sheriff badges (which is like health, but more Wild West-y!) before the round is up, you’re finished.

The nice thing about this game is how well thought out it seems. Not many people play first-person shooters for the story, but McGyro has a good one if you’re interested in that sort of thing. The fact that your enemies are all cardboard cutouts means that there’s no blood, and the whole thing has a very light tone, making it appropriate for most ages.

The pacing is just right, and the controls are more or less perfect (though I’m kind of terrible, so sometimes the gyroscope is too much for my bad aim!). You can even turn the gyro off, though I found that it’s difficult to get the hang of the slide and swipe aiming in that mode. With 15 levels, the amount of content feels right for a 99¢ app, and there’s a slot for an as-yet-unreleased multiplayer mode. While it hasn’t been implemented yet, the eventual addition of multiplayer puts this already-solid game in the “glad I purchased” category.