I have a confession to make: I never played The Bard’s Tale [$6.99] when it hit consoles back in 2004 (nor did I ever play the original 1985 version on PC). So, when the game made its recent debut on the App Store, I welcomed the opportunity to check out the quirky action-RPG. As it turns out, not only does The Bard’s Tale make a smooth transition to the small screen, but the great tongue-in-cheek story still works for folks that are looking to try it out for the first time, assuming they can get past the simplistic (and somewhat stale) gameplay mechanics.

For those that haven’t played it before, The Bard’s Tale follows the story of the unnamed protagonist as he gets swept away in a story rife with RPG clichés and humor.  Even though the game hardly ever takes itself seriously, the writing and humor remain well done and are the stars of the game. The voice acting also deserves a special mention, with Cary Elwes (of Princess Bride fame) as the voice of the bard. There are some that may roll their eyes at the sarcastic humor, but I believe that it’s actually a big part of the appeal as too many games take themselves way too seriously these days. 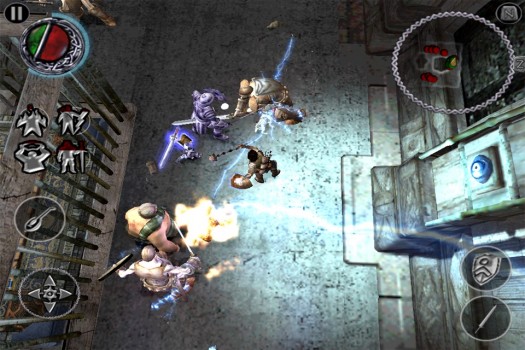 Gameplay-wise, Bard’s Tale is a top-down action RPG with a somewhat basic real time battle system. At the start, players can wield various close and long range weapons and execute simplistic combos to take down your foes. Every couple of levels, players are also given an opportunity to choose traits, which range from earning additional gold, to special ranged shots, to unlocking weapon specializations like two-handed swords and dual-wielding.

Players also earn money by picking up random treasure drops from slain baddies and random chests, which are used to purchase weapons and armor. The Bard’s Tale may not be as robust as newer games in terms of character customization, but it gets the job done as far as providing an adequate gameplay experience. Furthermore, the game is absolutely massive in terms of the main adventure as well as optional quests. 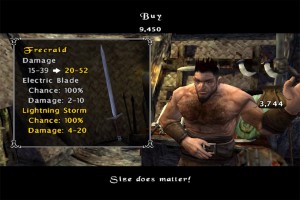 In addition, a big part of the gameplay in The Bard’s Tale is its comprehensive summoning system. The bard can summon a wide variety of companions from support-based characters to offensive warriors. You start out with a limited amount of companions, but you learn more as you complete the main story. It’s always recommended to have someone summoned to help you in battle, and a lot of the strategy in the latter part of the game will be choosing the most helpful companion for the situation.

From a controls standpoint, The Bard’s Tale offers an option of a virtual joystick and a touch-based controls scheme. The joystick works well enough, although I would have liked it placed a little further from the corner of the screen for comfort purposes. Meanwhile, I just didn’t like the touch-based controls as you seem to lose a lot of versatility with this method, especially during battles. I’d consider these concerns to be relatively minor but potentially frustrating, considering the difficulty of the game.

One area that may pose a problem for some players is the surprisingly hard difficulty (at least, compared to other iOS action-RPGs). The majority of my playtime was done on the normal difficulty and I found myself having to do quite a bit of experience and money grinding just to give myself a fighting chance while playing. In addition, the lack of a ‘save anywhere’ system makes for some frustrating scenarios if you happen to die before you make it to a checkpoint (a definite possibility when you’re dealing with random encounters on the world map).

Also, it’s important to note that despite the relatively simple battle system, you cannot expect to bowl over mobs of enemies by mashing the attack button (ok you can, but only after some serious grinding); there are too many enemies with special abilities such as knockbacks and healing spells. Instead, you’ll have to actually prioritize enemies and employ actual techniques like using your companion to divide and conquer. It seems obvious, but there aren’t a lot of action-RPGs on the App Store that actually require some organization and planning. Of course, folks can also take advantage of several IAPs ranging from extra gold to stat increases, which basically put the game on easy mode.

Whether or not you end up enjoying The Bard’s Tale depends greatly on your priority for what makes a good game. If you care more about story and overall presentation, then Bard’s humorous story, great voice acting, and decent graphics should leave you highly satisfied. The visuals are particularly well done on the iPhone 4S and iPad 2, as the added effects look great on these devices. However, players looking for a robust battle and character customization system may be disappointed as these areas are definitely where the game shows its age. Either way, despite its age, The Bard’s Tale merits at least some consideration and is recommended for any fan of action-RPGs.