Judge Dredd vs. Zombies [$.99] is what you think it is, which is to say, it’s an over-the-top dual-stick shooter that pits the equally over-the-top dystopian cop against hordes and hordes of the undead. Despite all signs of the End Times have come pointing to “Yes," Dredd is as moronically meat-headed as ever. The slick Versace-wearing, line-slinging judge, jury, and executioner has his hands full with himself throughout the entire experience. It’s as if, in a weird twist, this game is more about Dredd’s need to stroke his own ego than his desire to purge his precious and pure Mega-City One of zombies.

Hearing “I am the law" or some other ridiculously chest-puffing line every 15 seconds isn’t this game’s biggest problem, though — the free-to-play model is. It comes across as much too pushy and needed and, as a result, it consistently strikes me as gross. 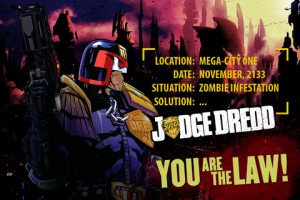 Sure, you can upgrade your weapons and bring along “special equipment" like “Instant Reload" or “Body Armor" using in-game credits, but they quickly end up costing too much in comparison to the amounts you can earn. The difficulty curve on zombie damage models are pretty sharp, too, so you’ll feel naked in short order — and grinding on previous levels, for whatever reason, won’t net you any extra credits.

Dredd sure doesn’t seem to mind. Like a 50-year-old wrestler who keeps taking bumps because he filed bankruptcy one too many times and still has a camper on a line of credit, an under equipped Dredd is consistently revved to keep battling against increasingly bad odds. His confidence and enthusiasm are off the wall. 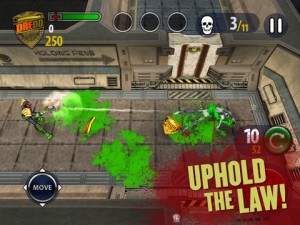 What really salvages this entire experience is  its combat model. It’s really, really enjoyable. Movement is a snap, while the shooting in particular is great. There’s a brilliant auto-aim mechanic that flawlessly moves from threat to threat as smoothly and intelligently as if you were the one making the choice. And even when you do want to control where you shoot, you can just tap on the screen to target.

A combo system, the reload mechanisms, and item pick-ups alter the pacing of the combat in consistently entertaining ways. As you kill, you’ll steadily earn more bonus points as a combo meter builds. The catch is that, whenever you stop to reload, the meter has a chance kick back to zero by virtue of inactivity. This is where the Dredd badge pick-ups littering the game come in: not only do they give you points, but they also keep that combo meter going when you’re not actively blasting zombies into re-oblivion.

This isn’t ground-breaking stuff, but it works and it works really well. Dredd‘s other constituent parts, on the other hand, are merely competent: the UI is inelegant but alright, the level selection and rating system are industry standard, and the visuals are OK. Nothing outside of the shooting feels particularly inspired. The lackluster and oftentimes barren level, sound, and presentation design leave a lot to be desired.

But… as far as fundamentals go, the fact that Judge Dredd vs. Zombies‘s combat rocks is a pretty big boon to what is otherwise a fairly competent, yet  occasionally annoying game. The bad parts, and particularly the greedy free-to-play hooks and the barrage of Dredd-isms, are the big stains. The shooting makes up for a lot of this, but there’s a whole lot of ugly to wade through before you get to the good.