Whizzers [99¢] by Demonual Studios is an endless-running game, whereas Whizzer (without an “S") is an old restroom-locating application from 2009. This review is for the game, not the toilet finder.  Although if you’re busting and need some entertainment, you may decide to get both.

The goal of Whizzers is to reach the end of each side-scrolling level, by running, climbing, jumping and dropping. That sounds pretty standard and reasonably easy, until you realize the platforms you’re standing on are actually sinking into molten hot lava. The lava eventually floods the platforms, leaving you with fewer and fewer things to stand on, or perhaps nothing to stand on. Therefore, it’s advisable to run for your life and to seek higher ground.

This game mixes the platforming and endless-running genres, as you run and jump across multiple levels of dis-jointed platforms, choosing your own pathway. But, there are other options available: Teleportation portals will beam you nearby, which could provide a handy short-cut, but might take you backwards costing precious time. There’s power orbs for speed, quick rocket flights, and bubbles to float you up to higher levels. These items all appear frequently, so there’s always something to aim for next. 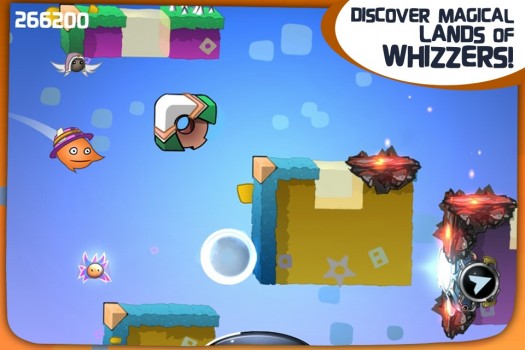 Some platforms are covered in sticky oil which slows you down, slippery ice which is difficult to jump from, scorching lava pools which deplete your health or spikes to impale yourself on. There’s also monsters to jump on before they eat you and crushers to avoid. But if you can successfully navigate through all these obstacles and reach the end of the level, hot gusts of wind will lift you up and carry you off to the next “land".

My favorite feature of Whizzers is that occasionally a little arrow appears, advising that a kidnapper is nearby.  This creates a little dilemma: You could wait for the kidnapper if it’s behind you, but this may result in the lava catching up with you and burning you to death, so it’s a gamble. Once you reach the kidnapper, the captive whizzer is rescued – and is unlocked as a playable character. This provides a little chasing game within the levels, which is made trickier by the fact you can’t move to the left. 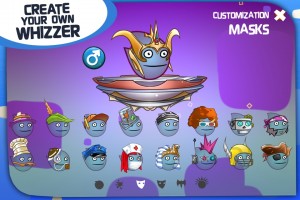 You can also collect twelve little flying companions, named “Followers", who fly alongside your whizzer, providing you with special abilities, like increased running, shield, jumping and/or climbing abilities. You choose which unlocked follower to accompany you at the start of the game.  You can also find little fairies, which heal you, give points and temporarily stop the lava from rising.

At the start of each game, you can customize your own whizzer character, by choosing it’s gender, shape, color and masks. But you have to unlock the items by reaching certain levels first, or via In-App Purchases (IAP). A handful of the whizzer customization items can only be obtained via IAP, but this doesn’t affect the actual gameplay. You might end up with a whizzer with an elaborate mask, or wearing a paint bucket on his head.

A multiplayer mode is provided via Game Center. You can race up to three other online players across a randomly generated (procedural) level, to the finish-line. There’s no combat during this race, but you’re sharing the same track, so it also becomes a race to collect and use items, such as the bubbles or health-boosting fairy’s.  Unfortunately, there’s not many people playing online, so it can be difficult to get a random match-up. In fact, I wasn’t able to make a random match successfully despite multiple attempts on different days. Perhaps the developer should add an AI opponent to race against instead.

Whizzers is a well-designed game with plenty going on in the levels and 21 achievements to complete. The rising lava works well as a “ticking clock" and encourages you to keep moving, to avoid incineration. The multiple layers of platform provide a depth that’s missing from many other single-layer running games. It’s just a shame more people aren’t playing the multiplayer mode, although that’s a problem faced by many good, but lesser known games. The single player mode is worth the dollar though, and if you manage to get some multiplayer action consider it a bonus!