Flick Home Run [99¢] from Infinity Pocket has been camped out as the #2 paid application on the American App Store for a few days and hit #1 for top grossing iPhone apps, yet it’s barely been mentioned in our forums, which is rather unusual for a top-ranking game. We decided to investigate why this baseball game’s so popular. That was a few days ago …and I’m still playing it.

Rather than displaying a batter, bowler, bases and fielders, like a regular baseball game, Flick Home Run focuses entirely on smacking home runs, as the name suggests. There’s no awkward floating virtual bat displayed either, because your finger acts as the bat and your swipe is the swing. When you place your finger on the pitch button, a ball is bowled by an unseen pitcher from the right side of the screen. You flick your finger at the ball, timing it right to smack it as far as possible.

If the ball flies out of the park and into the parking lot, smashing into some parked cars or a neighboring building, that’s a good result and the crowd will cheer. But to do this requires quick responses and accurate flicking, because the ball travels further if you flick it right in the center. This game has caused some extreme flicks, right off the iPod screen and into the air (once, into the wall) which almost feels like swinging a bat. 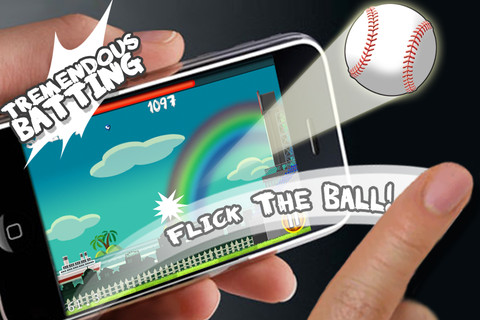 There are twelve different ball types, but you never know which you’re facing until the last moment. As the pitch approaches, the ball type is suddenly revealed. It could be a regular baseball, a fast ball, a fast drop or notorious curving s-ball.  There’s even ninja balls. Some balls are heavier, so cant be hit as far, while others act as score multipliers. Points are awarded for distance and hitting balloons or stars, which brings in a small luck factor. These points are converted to experience points (100 points = 1 XP), for leveling-up your power, accuracy and/or the number of delivery-type reveals available, to see what’s coming next.

The five game modes are: Minor challenge, major challenge, multiplayer, moonstar mode and practice, with each mode having a separate Game Center leader-board. Practice mode lets you choose which ball types to receive and then keeps a tally of your successful hits. 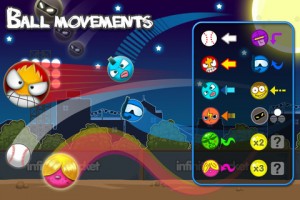 The aim of minor challenge mode is to complete 15 different steps (objectives) in the same game. Each step requires you to successfully hit a certain number of balls. Each time you face a pitch, miss the ball, or don’t clear the minimum distance, your life bar decreases and the game ends once your life bar is empty. However, making big hits and scoring points will recover valuable life points.

The furthest distance allowed in the minor challenge is 1000 ft and the ball stops just after reaching that point. There should really be no barrier imposed, because it’s wrong to tell a batter he can only hit the ball a certain distance. Also, if the current pitch depletes the last of your life bar, a drum-roll plays and it’s game over no matter how hard you hit it.  The player should be given that last chance to strike the ball well and save themselves. Instead when the drum sounds, there’s almost no point swinging, because your game’s already over.

Major mode is unlocked by completing minor mode, although it’s exactly the same park setting, just with harder difficulty and some new balls. However, you can hit the ball further here, as the 1000 ft limit is extended. Major mode is presented as a separate game mode, but really it’s more of the same; just harder.

Multiplayer mode lets you compete with a friend (or a random match-up) via Game Center. This 2-player online mode has both players racing to full a points meter with big hits. You can’t see each other playing, but the opponents progress bar is visible.

Moonstar mode is like a mini-game. You’re given nine balls to hit into as many stars as possible, by bouncing the ball of various moons in the sky.Because of this, you won’t perform well at this game until your power attributes are upgraded enough to reach all the stars, which requires a lot of grinding or optional IAP upgrades.

Flick Home Run is a simple concept which is well-executed by Infinity Pocket. It’s already provided days of  entertainment, which is a dollar well spent. With so many excellent  games available, I’m a little surprised this is in the very top rankings, but this baseball interpretation is certainly worth buying.