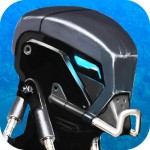 It’s easy to see why cover is so widely used in every modern game with a gun in it, but it doesn’t excuse how boring the systems usually are. Epoch [$5.99] stands out because its cover mechanics are actually fun to play with. They smartly combine agility and athleticism to the standard pounding and popping, while also offering an alien uptempo pacing, courtesy of Uppercut Games’s exploitative enemies. The cover system is strong enough, actually, to carry the game to completion, which is an important note to make since, aside from the story hooks, the game doesn’t have a lot more to offer outside of a standard weapons / items upgrade model.

Think of Epoch as a bizarre “what if" scenario come true. It’s sci-fi Infinity Blade with guns, and it’s pretty thorough with its adaption of that game’s upgrade model and on-rails structure. The key departure is within Epoch‘s action model — instead of hacking and slashing, you’ll be whipping, sliding, jumping around, ducking or crashing your robot into pieces of cover as enemies sling bullets and lasers at you. If you’re moving tactically, enemies will lose their bead on your metallic frame, and you will then be subsequently free to target them and fire without worry. 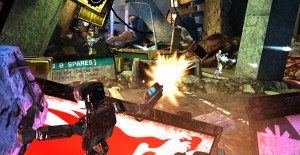 The enemy AI is aware of what you can pull off, and the way they coax you out of a flow or a dead period is one of the more exciting aspects of Epoch. Some enemies fire timed grenades that you’ll need to avoid, while others can fire sweeping lasers that you’ll need to jump over, and so on. Mitigating these hazards, while also handling the other enemies firing at you at different speeds and rates, keeps the volume of battle on 11 and makes you to consider options and moves ahead of the one you’re currently executing. I like this approach to battle; it’s kinetic, but forces some thoughtfulness.

Moving in cover is a simple, visceral joy, by the way. The animations are smooth, the swipe controls are intuitive, and you get a palpable sense of power, speed, and actual control as you bound from pillar to pillar, barrier to barrier. Epoch does a great job at mixing up the action, too, by bringing in new enemy types, compelling waves, and generally keeping you on your toes throughout the game. Though, with that said, it lasts just shy of an hour. 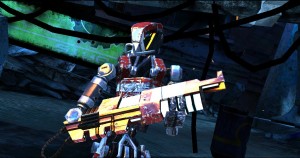 Shooting is a side-bar, much like cover is for most cover-based shooters. It’s automated, but based on who you target. There are, on the other hand, some user-controlled special abilities that essentially act as upgradeable crowd-thinners on cooldown clocks. Think magic but in the real world explode-y sense, and you’ve got the ticket.

Epoch … encourages its users to play through sequences multiple times in order to earn more income to buy new guns and new abilities from its in-game store, which is brimming with high-cost content. There’s a stumble here. Re-runs though a level you’re previously beaten doesn’t appear to yield new fights or content outside of difficulty. The kickback is that, even though the combat is awesome, you’ll find yourself doing the maneuvers in the same spots.

Another point: even though the on-rails approach that Epoch takes to guide you through its narrative element is effective, the lack of control can become grating when you’re just re-loading the same content over and over again. Infinity Blade disguises this same problem effectively by giving you the ability to pick where your character goes. It also dishes out some optional side paths and item pick-ups. Epoch doesn’t, so you’re left with zero to do outside of fighting whenever you’re stuck in a grind cycle.

If you’re into upgrades and that rinse and repeat model of progression I doubt you’ll have any qualms with Epoch because, otherwise, it’s a good game that really executes on what sets it apart from a billion other titles: it’s cover-system. You’ll jump, glide, and whip all over the place while executing on some cool on-your-heels strategy padded out by a host of competent mechanics and systems. I recommend it, but also excuse the game time and a lot of the pacing issues.

Oh! And check out the game’s story. It’s a delight and delivered just right.