DanLabGames’ DynaStunts [$2.99] places itself in a difficult spot from the start. Motocross games, trials games and even racing games are genres that are already looking well stocked on the App Store. Just in the last few months we’ve seen several motocross games pop up, including a few solid ones, but while DynaStunts might initially look like another trials game, it might be best to think of it as something else altogether — a platformer.

For anyone who has played a significant amount of motocross games, this is the most evident in the control scheme. It’s reversed, as in, the gas and brake are on the left, while the tilt is on the right — like a platformer, but not like most other games of this ilk, where the tilt is usually on the left. There’s no option for customization either, so if you’ve been playing a lot of say, Bike Baron[99¢] recently, you’ll have a hard time grasping the controls. The developer has mentioned in the forums that customization is on the to-do list, along with adding Game Center achievements, but if you train your brain to think of DynaStunts like a platformer, you should get the hang of it quickly. 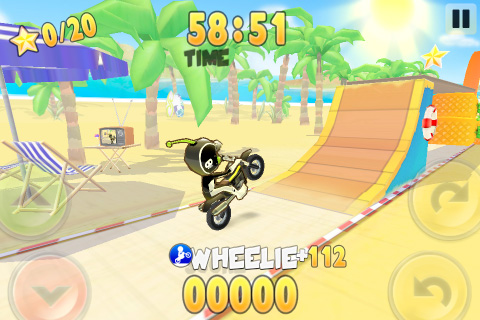 It feels like you’re supposed to play it more as Sonic the Hedgehog on wheels. DynaStunts isn’t particularly difficult to get through, but it is a lot harder to complete it with all the score modifiers. Each of the 25 tracks comes with three sets of challenges: finish it, grab all the stars and complete different tricks. They’re also each sectioned off into five different cups with different stage designs and obstacles.

The problem with that is that you can’t take on individual tracks at a time, you can only load up a cup and play it through to completion, which makes tackling each of the objectives a little more difficult, not to mention playing on the go can be a bit a trying if you need to walk away. Thankfully, the benefit is that the track design never gets stale and you’ll find new and interesting power-ups, obstacles and other goofiness as you move along. 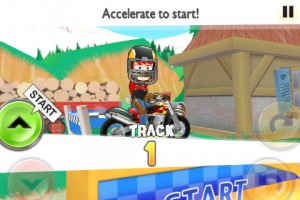 Collecting stars isn’t just for showing off on the leaderboards though, as the more you collect, the more you can customize your bike and your character. You can, if you’re feeling especially lazy, also just buy these via in-app purchase, but it’s far more fun to grind up to get the outfit you want.

The general vibe of DynaStunts is cartoon-centric, from the track design to the characters and even the stuff you see going on in the background. Stylistically, it reminds me a bit of the art associated with the Gorillaz, especially the cell-shaded characters. On a retina display is looks fantastic, but even on the supported older devices it’s still one of the beter looking motocross games out there. The style is consistant too, from the menu screens to the track design, you feel like its all a part of a single world.

The aesthetic comes with one slight problem. The camera’s close view is great for showing off what’s happening around the track, but it also means you’ll have a hard time seeing what’s coming next. Most of the time it’s not a big issue, but since there aren’t checkpoints here and the levels are relatively small, it can be a bit annoying if you’re consistently missing something and have to routinely restart each time.

The game also struggles a bit with the reload process, namely in that the physics occasionally take a good ten or fifteen seconds to fully play out, leaving you there frustrated and waiting to start the level again. I’m a bit of stickler when it comes to fast reloads in these types of games, but even grading on a curve for my pet peeve still leaves it failing in this respect. I really just want to race around, not watch my dead character flop around explosive boxes.

In general, DynaStunts still manages to be a solid experience. It’s casual enough that most people should be able to pick it up, but it’s also packed with enough content that those who want to can explore it further.