I’ve been searching for a new asynchronous multi-player game for a while, so when I saw Poker Pals [99c / Free / HD] released by Chillingo: a poker-based  game with asynchronous multiplayer mode, my eyes went wide. What I didn’t anticipate was that within a few hours I would be snatching up my iPod every couple of minutes to make my next turn, juggling several games at once, like a crazed poker addict. (Thank goodness there’s no real money at stake, just bragging rights.)

Poker Pals is not a regular poker game. There’s no chips in the middle of the table, no antes and no calling, raising or bluffing. This is actually poker redesigned as a board-game and it resembles a mixture of poker and Scrabble, which works really well. It’s reminiscent of Sword and Poker 2 [$3.99 / Free], which also presented poker as a board-game, but included RPG elements. 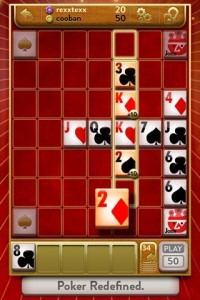 The idea is to lay down poker hands, like a three-of-a-kind, straight, flush, etc. But as in Scrabble, you can only play your cards if they interconnect with one or more existing card(s) on the board. In Scrabble, if your tiles form two new words, you score points for them both, and Poker Pals works in the same way. So when you slam down a full-house, you might also intersect with existing cards, forming a pair and a straight at the same time, scoring combo-points for all three, which is super satisfying.

The points range from a lowly pair (10 points) to a royal flush (90 points), plus a 10-point bonus for each card you placed. Although a pair of threes scores the same as a pair of kings, as it’s based on the hand type, not the face value. Anything less than a pair doesn’t score. It would be even better if the face value of cards was taken into account when scoring, as occurs in real poker.

In the four corners of the board, there are wildcard jokers. If you place your cards against these, the joker defaults to the most valuable card for your current hand. For example, if you have two aces it might become an ace, giving you a three of a kind. The game continues until the 7×7 play-field is fully populated with cards, at which point the highest scoring player wins. And the games are often close and exciting. 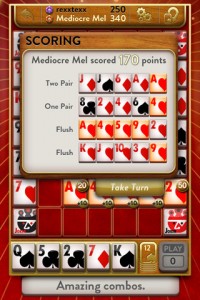 The game modes include single player (against the computer AI, with 3 difficulty levels), online multiplayer, which includes an option to play a random online opponent. There’s also a “pass and play" option for sharing the device with your family at home, although you should probably let them complete the in-game tutorial first.

The free lite version contains all of the game modes, but you’re limited to three simultaneous games in progress. If a fourth person invites you to play, they must wait for one of your three active games to end. However, once upgraded, you can play unlimited simultaneous games as well as freeing yourself of in-game ads and unlocking a higher single-player difficulty level.

Leaderboards and achievements are handled by Crystal, with Game Center also storing the achievements, except a bug is currently stopping the Game Center achievements from appearing correctly. Overall I’ve been having a fantastic time with Poker Pals, I just wish it were a little less cumbersome to switch between existing games and it really needs in-game chat functionality.

Poker Pals delivers a fun interpretation of poker, with desirable asynchronous play and random match-ups for people without many online friends. It has a high replay value and should come with a warning about time-consumtion, due to the constant, but pleasurable interruptions when it’s your turn. After trying the free version initially, upgrading to remove the ads was an absolute no-brainer.