Blosics [99¢ / HD] is a casual object-flinging game like Angry Birds, but this is no clone, as it feels fresh and unique with plenty of different features to unlock. FDG Entertainment, the makers of Cover Orange [99¢ / HD],  advise that the online version of Blosics has been experienced by over 40 million players, which is quite a lot of people, but personally I prefer to play my games on iOS devices. Thankfully, that is now possible with the arrival of Blosics in the App Store.

The idea is to throw balls at unfriendly colored blocks, which are often stacked into piles or structures. The grumpy blocks have little faces which are always frowning as they mutter comments like:  “Yada yada" , “Nom nom nom", “Watch it!", “Hey!" and my personal favorite quote: “Blurgh!" No wonder people throw balls at them.

Initially, you’ve got one type of ball to swipe at the moody blocks, but by completing levels and earning stars (or just making a quick in-app purchase), you can unlock up to 13 power-balls with special abilities, like bigger balls, heavier balls or multi-balls. There are spiked balls, attract balls, and even psychic balls for you to fling around (please note that any innuendo around my regular use of the word “balls" in this review is mostly unintentional). 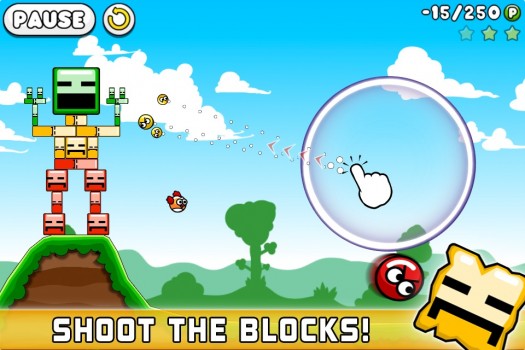 Whereas Angry Birds gives you pigs to catapult in a set order, Blosics lets you choose which type of ball to toss each turn …but there’s a catch: Throwing balls costs you points, with more powerful balls costing more points. So the aim is to get rid of all the blocks using the fewest and cheapest balls possible, to achieve good scores and three stars. Game Center leaderboards (‘Highest score’ and ‘Most stars’) are provided, along with forty achievements.

As you’re playing the level, the screen displays how many of the three stars you’ve achieved on that level so far, plus how many more points are required to obtain the next star. You don’t necessarily need to get all the blocks to obtain three stars and if you’re stuck on a tricky level, you can return to it later once you’ve unlocked more powerful balls to take another crack. 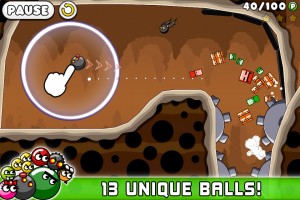 Blosics is a strategic game, in a few ways. First, you need to choose a target, because some colors of block are heavier and worth more points. Next, you need to find a weak-spot to target, as this is a physics-based game where objects fall, collide, roll and float, and the ghost of your last shot is shown to assist with aiming. Then, you need to determine which ball to use: One expensive powerful ball may clear the level, but two well-placed cheaper balls could score more points. And finally, you set the power of the shot and throw!

There are two control schemes available: My preference was “Classic" (tap, swipe back further for more power and release) or “Alternate" (drag the ball around to get up speed, then release it in the right direction, like having a tennis-ball on a string). A handy “restart level" button is provided for quick repeats when you mess up.

The controls are really easy to use, although it’s not easy to do precise softer shots (especially with the multi-ball) as the controls seem optimized for harder more direct shots. Also, the ball selection button opens another screen, which isn’t too intrusive, but seems unnecessary for such a common action. It would be better to manage the ball selection process right on the main game screen.

There are four nicely varied episodes to complete, with 120 levels in total. The game opens in the ‘World of Balls’ (which doesn’t sound like a particularly appealing place to live), followed by underwater, underground and outer-space episodes, with each level having themed music.  In the underwater levels things move slowly and water currents can drag the blocks and your balls across the screen, or into a whirlpool. In space, the gravity varies and things move even more slowly.

Many players will breeze happily through the early levels, but once you’re a couple of episodes in, some levels require more thought to three-star. Blosics reveals new features throughout the game, from the start right through to the last episode, so we’re looking forward to trying all the unlocked items on the promised “coming soon" levels.