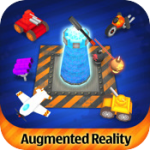 Just two days after we took a hands-on look at ARDefender from developer Int13, the game has now become available in the App Store as of this morning. What is a nice surprise is that the game has launched for just 99¢. In ARDefender, you’ll print out a special PDF image from ARDefender.com that is read by the software and creates a 3D tower in the real-life space of the iOS device camera’s view. Enemies then attack the tower from all angles, and you fend them off with a weapon placed on top of the tower. You’ll have a machine gun, rockets, and a laser at your disposal as you take on the endless waves of increasingly difficult enemies.

It’s a cool concept and one that works really well in practice. I was blown away with how convincingly the tower seems to actually exist in the area where you’re playing the game. The gameplay itself is also quite fun, although pretty bare bones. There’s really only one mode to play through in ARDefender which has you defending against seemingly endless waves of enemies. Beyond that, there’s not a whole lot more to the game. I’d love to see something along the lines of a story mode, different styles of towers, or online leaderboards and achievements. Still, what’s here in terms of gameplay is pretty darn fun anyway. This video shows off one round of ARDefender as well as me playing around a little with how the technology works:

One thing that is important to take note of is that ARDefender will not work with the original iPhone or iPhone 3G. It would make sense that the older iPod touches would not run the game as they don’t have an external camera (the game does run on the new camera-enabled 4th generation iPod touches by the way), but apparently ARDefender requires some processing power that needs at least a 3Gs iPhone or above.

Normally when a game only has one mode to play with not a lot of bells and whistles, it can be hard to recommend as those games tend to get old pretty quickly. In ARDefender‘s case however, the technology is just so impressive and the gameplay is so well done that it’s hard to pass on the game when it’s only a dollar. It’s definitely something you’ll want to show off to your friends because it’s so neat, and players in our forums are already finding all of the wacky places they can place the PDF image and play the game (including pulling up the image on a second Apple device and growing the tower right out of that device’s screen). If you have a dollar to spare and a capable device, you should definitely give ARDefender a try.