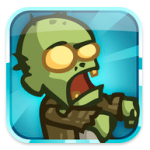 The original Zombieville USA [$1.99 / Lite] hit very early in the life of the App Store and was one of the many initial indie success stories that helped to spur the whole iOS development gold rush. Heck, it wasn’t even called iOS back then. Since then, Mika Mobile has gone on to release OMG Pirates! [$1.99] and the absolutely fabulous Battleheart [$2.99]. In fact, if you haven’t played or heard of Battleheart, you really need to take a time out and our review of it.

Anyway, Zombieville USA 2 [99¢] seems to be a great sequel so far in every way. It takes the formula from the original, adds tons of unlockable content, full Game Center integration, iCloud support for cross-device syncing… And best yet, co-op multiplayer either locally via Bluetooth or online via WiFi.

We’re going to give the game a thorough once over in our upcoming review, but our initial impressions are remarkably positive, folks on the forums like it, and the developer is already talking about tweaks for the first update.