Late in 2010, Semi Secret released SteamBirds [$1.99 / HD], a turn-based aerial dog-fighting game based on the Flash game of the same name, which we thought was “tons of fun". Apparently other people liked it too, as it’s reportedly been played by 12 million people worldwide (including the online Flash version). Well, the original makers of the game, SpryFox, teamed up with HalfBrick to release a sequel – Steambirds: Survival [Free/HD]. And it’s definitely worth checking out (again!)

It’s a top-down dog-fighting game where you play a pilot with the Allies, fighting against the Axis powers, to protect the United Kingdom. But the cool twist is that it’s also turn-based. Your aircraft has an arrow in front of it, which represents the distance and direction it will travel in the next turn. You can bend the line to control your plane’s flight-path.

When you press the “End Turn" button, your plane moves for a couple of seconds, as do any other planes in the sky, including enemies.  If any enemies appear in front of you, your plane automatically opens fire. It’s like a slow-motion dog-fight, which plays out in bursts. Some of the AI controlled planes are on your side, so they’ll also shoot at any Axis enemies. 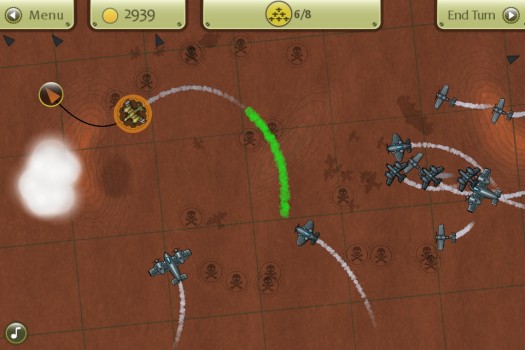 In the original version, the missions were pretty basic: The enemies all appeared at once and you had to shoot them all down. Whereas Survival has eight cities to unlock and defend, like Aberdeen, Manchester and Exeter. Each city has eight specific missions to complete, such as  “Down three planes", “Survive 5 waves (of attack)" or “take down 8 bombinos within 5 waves". Instead of one wave of enemies, there’s now multiple waves, making the missions feel more much varied and interesting. In fact, there’s much more content in this release overall, with 64 missions and eight planes now and a further 56 missions and seven additional planes to be released soon.

Once you’ve completed a mission you can either return to base to play the next mission, or continue playing for glory and to earn extra copper (money). You’ll score more copper by taking out more challenging enemies. Once you’ve beaten a mission, you can’t replay it, although after beating the first seven missions for a city a much harder eighth “infinite" mission is unlocked. You keep playing this eighth mission until the enemy eventually shoots you down; and you can replay it too, for better scores in Game Center or Openfeint. 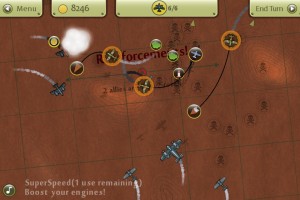 In the original, your plane started with specific power-ups, with no additional power-ups being available during the mission. In Survival, power-ups can be gained by shooting down enemies. To use a power-up, you simply tap the arrowhead in front of your plane to display an icon for each acquired power-up. This might include super-speed to travel further or bombs to deploy when planes are tailing you. You can also collect homing missiles, a 180 degree turn, a 360 degree attack, shields or maybe a poisonous green gas to deploy in front of an approaching enemy aircraft.

The touch controls work brilliantly, allowing you to frequently and quickly adjust your plane’s direction as you hunt down other (moving) planes. But remember, you’re sometimes given a finite number of turns to complete a mission, so if you fly around excessively or chase down every single power-up, you could put the mission in jeopardy.

In Survival, each of the eight cities features a different aircraft for you to pilot, each with different strengths and weaknesses. For example, one of the first planes you unlock is the “Buster", a bomber with relatively weak guns. Whereas the “Looper" is powerful with fast guns, but has relatively weak armor and relies on 360 degree power-ups and careful flying to stay alive. You have to use different strategies for each unique airplane.

You can tap any aircraft, including enemies, to view it’s statistics (“health", weapons, speed, agility and armor) plus a status description, such as “on fire – nearly dead" or “going down!" This allows a clever player to be strategic in their attacks. For example, prioritizing your kills by attacking the main threat first and targeting planes with a shorter firing range from a distance. Of course, if you prefer more casual play, you can just fly around shooting at stuff.

Another new feature is that you can use your copper to buy assistance at the start of a level (up to two extra controllable allied planes). This allows you to fly multiple planes together as a squadron, for defensive maneuvers or for stronger attacks. You can also use copper to unlock cities earlier, although this leaves less to spend on other things.

Steambirds: Survival is a free-to-play game, with advertising banners at the bottom of each menu screen and full-size advertisements between each level – but there are no adverts displayed while you’re actually playing (although the standard version has a bug which causes ads to appear obtrusively, but the developers have already submitted a fix to apple). If you choose to remove the adverts altogether with an In-App Purchase (IAP), it also unlocks all of the eight cities. The developers advise that the entire game can be completed without IAP, but it’s available if you’re impatient to progress.

The developers plan to eventually deliver asynchronous multi-player Steambirds, which would be super-awesome. With the arrival of iOS 5, hopefully we’ll see more asynchronous turn-based games being released. In the meantime, there’s a free Flash version of Steambirds: Survival to try on your computer. It isn’t exactly the same as the iOS version, but gives you a feeling of the gameplay …but since it’s free (and a great game) you might as well just download the iOS version!