As far as board games go, Monopoly can be found somewhere near the bottom of the barrel. It’s simple to play but hard to keep track of, it takes forever, and someone always steals from the bank. Usually it’s the banker, who’s probably just looking for a bit of entertainment to offset the monotony. Someone in Korea took the fundamentals of Monopoly and made BlueMarble [$0.99] with them, which is, well, equally unfun, according to the fine people at BoardGameGeek. Thankfully, when the folks at M&M Games Inc. adapted that game for iOS, they kept only the basics — and then they threw in card collection, deck building and adorable avatars.

BlueMarble doesn’t have the cleanest translation, but if you’ve ever played either of the board games you won’t have trouble falling into its rhythms. The first square gives you a nice chunk of cash, you visit places around the world and buy them, and build houses or hotels on them. Some squares cause you to lose money, and others win you more. There’s even a jail, er, desert island. 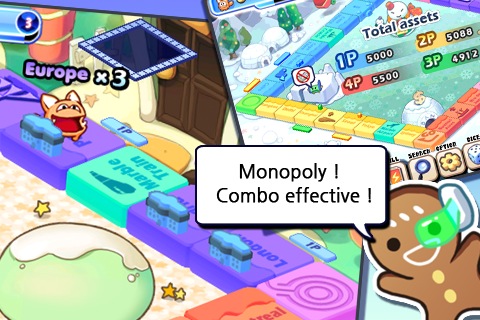 Instead of fighting over who gets to play the hat and who will be the race car, BlueMarble lets you pick between adorable animated animals, blobs, robots and more. And you don’t necessarily need to play until all the other players are bankrupt — in single-player, the game usually goes for a certain number of rounds, at which point the player with the highest worth wins. You can also play until someone reaches a certain amount of money or total net worth.

But what really sets BlueMarble apart is the addition of collectable cards. In single-player, each match has a second condition to meet — hitting it wins you a new card. You can also earn stickers, achievement-like meta game rewards that unlock new cards and avatars.

The cards replace “Chance," “Community Chest" or “Key" cards, depending on which game you’re used to. You can build a deck of up to twelve cards (out of a possible 80 cards), and you’ll always have three randomly-chosen cards available to you while you’re playing. They cost marbles to use, and you earn marbles as you move around the board. But there’s a catch — it costs marbles to upgrade your lands too.

The cards let you do all sorts of things. Some are familiar — one lets you leave the desert island instantly. Some are aggressive, letting you steal lands, marbles and cash from your opponents. Others are stranger, or reliant on luck. Deciding which to bring, when to use them and whether to save or spend your marbles adds a nice layer of strategy to a game that otherwise rides entirely on a roll of the dice.

The single-player levels are abundant, spanning six worlds, each with ten scenarios to master. The multiplayer, on the other hand, is sadly lacking. BlueMarble offers single-device multiplayer only, which isn’t the best call for a non-iPad game. I’d love to see an iPad version — the extra screen real estate would show off the candy-colored visuals beautifully, and I could see playing with friends on the big screen. Even more, I want online multiplayer. I’m not holding my breath, but an update that brought Game Center and its associated multiplayer is exactly what this game needs.

BlueMarble is currently on sale, so if you’re considering buying it, do so while it’s cheap. It’s great fun, but without proper multiplayer integration it’s probably not worth the higher asking price. If you share my fond memories of childhood games of Monopoly, though, and are looking for something that scratches that itch while actually entertaining, you won’t do much better. Charming, cheerful and fun, BlueMarble does a great job of breaking the mold while not straying too far from its roots — and you won’t ever have to be the banker.