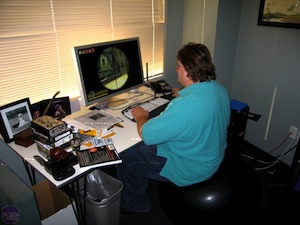 We’re in the middle of a fluid and defining time in the games space as digital really takes hold, nontraditional payment models continue to prove viable, and expectations of how and where people play their games mutate. Things are changing, no doubt, and we’ve heard a fair share of doomsday scenarios for multiple platforms as a result. This one from Valve boss Gabe Newell is pretty juicy as far as these things go. Speaking at a tech panel the other day, Newell said that he suspects Apple might step into the living room and blow up that particularly isolated experience into a perspective-shifting one that’ll spell the end of a ‘separate’ console platform.

For some context here, Newell believes there are four legitimate platforms at the moment: Internet, mobile, the computer, and the console. Newell’s also a noted not-fan of closed platforms, which was pretty apparent during the panel covered by The Seattle Times.

“I suspect Apple will launch a living room product that redefines people’s expectations really strongly and the notion of a separate console platform will disappear,” he said.

I often wonder if Apple’s hobby project, the Apple TV, is ever going to become the core living room games device it seems primed to be. With features like iOS 5’s AirPlay mirroring, it’s on the cusp. This isn’t the shiny and new thing Newell is speculating about here, but it’s a solid start.

[Via The Seattle Times]