Another physics-based puzzler with cute graphics and happy music in the App store, you say? NO WAY! Yes way, if you can wrap your mind around the uniqueness of that concept, then you just might get into Roll in the Hole [99¢/UHD].

You will play the roll of PoPo, a happy-go-lucky fat panda who hoards ice cream. When some jerk gorilla comes along and decides to take his sweets stash, he gets mad (although he doesn’t show it) and goes on an adventure to recollect all his lost desserts. For some reason, precision physics also play a role there, even though that makes zero sense in a story context. But I don’t play iOS games for the mind-blowing realism, and I’m guessing you don’t either.

Each level is fairly simple: Just a few obstacles and a hole at the end that leads to the next level. At first platforms will be the only thing to navigate, but as you progress you will also use balloons for bouncing and other things. There are ice cream bars in each level to collect too, and the more of them you snag, the higher your score will be. The challenge comes in getting them all and not falling off a ledge, which is a lot harder than it sounds. 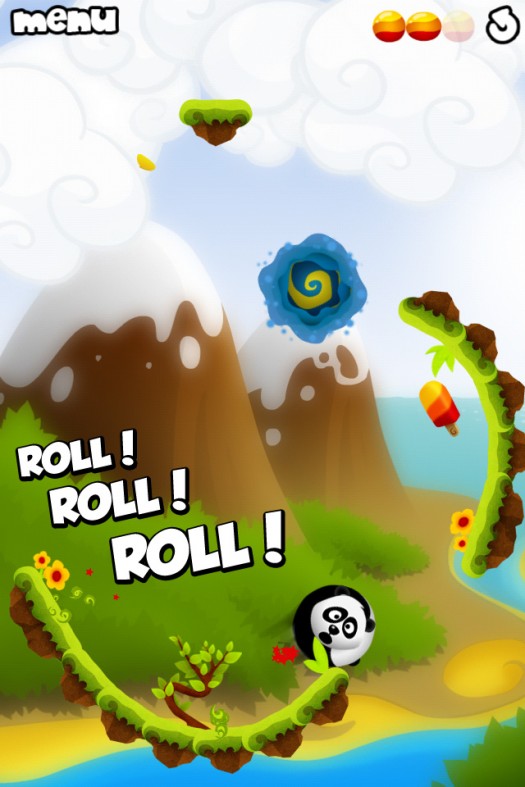 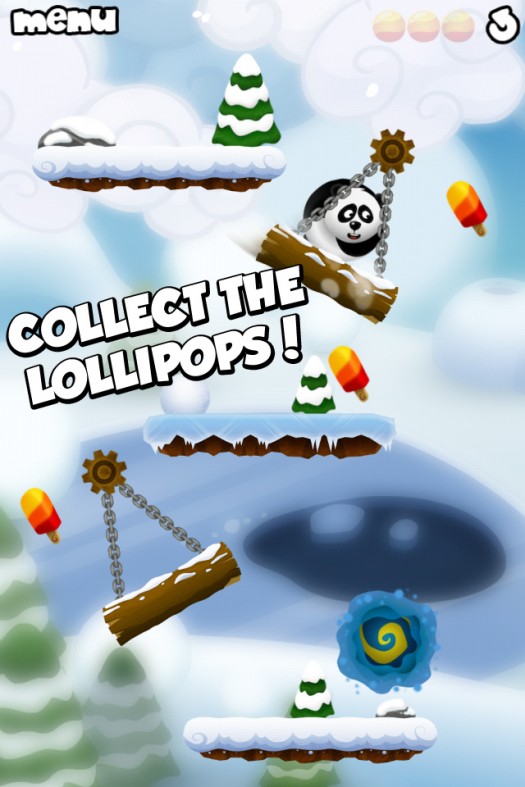 Control is an issue with Roll in the Hole, although at first it seems as if it’s working just fine. The actual interface couldn’t be simpler — before play begins, you’ll be shown a dotted line which splits the screen between left and right. The only way you’ll control your rotund friend is to tap the left and right sides of the screen. Even though I knew this, I found myself turning the phone the first few levels, just like I used to do back in the days of NES where I believed jerking the controller to the right or left would make Mario jump that much further. Some things never change, I guess.

In all honestly, I think turning the phone would have felt more natural than the actual mechanic the game uses. In early levels, it works fine, but when you need precision, it feels soft, as if you need more responsiveness than the game has to give you. When you need to maneuver through tiny platforms and then bounce on a balloon to get height to get to the goal, you really need to be able to control your character perfectly. I’d say that getting frustrated by level 12 is a bad sign for the majority of the casual audience, as they tend to want to have fun rather than struggle to get a game to control in a way that it cannot.

The good news is, if you do get too annoyed with one level to continue, the game won’t allow you to stay stuck. You can choose to skip a level in the menu and come back to it later, which really will be a blessing in disguise if you feel like throwing the phone on the floor and stomping on it (and there were times when that happened to me.)

Roll in the Hole boasts 72 levels total and also has connectivity to Crystal, Facebook and Twitter, making it pretty easy to share your score with others if you like. It has some strong points when it comes to overall presentation and the quick play (you can finish a level in under 10 seconds), but I really missed the ability to tilt my phone to help control PoPo. It just felt like a feature that was missing, and while the game is good without it, it could have been great with it.