Anthill: Tactical Trail Defense [$1.99] from Image & Form is a clever and innovative game which let’s you control an ant colony, which is being attacked by various predatory insects. It’s a real-time strategy game about insect warfare. You act like a general, overlooking a creepy-crawly battlefield and dictating the strategy for the colony’s survival by gathering food, engaging in combat, and collecting artifacts.

You start by drawing a straight or curved line with your finger, which originates from your ant-hill.  This represents a pheromone trail for ants to follow. Once you’ve finished drawing a line, you specify if the new route will be used by workers, soldiers or spitter ants.

The lines are all color coded, with worker routes in blue, soldiers in yellow and spitters in pink.  Once you’ve drawn a line, any ants of that type will emerge from the anthill to patrol along it. There’s no limit to how many separate lines you can draw of each color, but if you draw too many your ant forces will be spread pretty thin. 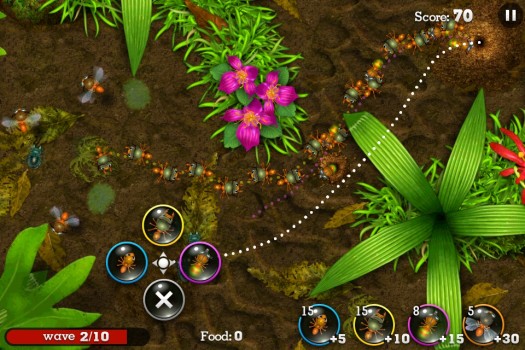 Each type of ant has a different specialist role. Soldier ants attack and kill predators, leaving their carcasses lying on the ground. Worker ants are responsible for collecting food and will work as a team to carry any large insect pieces (or artifacts) back to the ant-hill, because you eat what you kill. The more worker ants deployed, the faster the food is collected, but if there’s enemies around, the workers run away. Spitter ants love to inhabit burrows in the ground and spit at nearby enemies. They’re particularly good at taking out any airborne predators. But if you’re too slow, other insects may beat you to the burrows and use this vantage point to spit on you.

Lastly, the bomber ants don’t require paths to be drawn, as they can fly to any part of the screen where you tap, which is handy for attacking any approaching big bugs. You need to tap in front of moving enemies, as it takes a while for the bomber ants to fly to the target zone. After each aerial attack, they return to the ant-hill before you can re-deploy them. To improve your chance of success, you can tap the screen several times, to dispatch a whole swarm of bomber ants and target multiple enemies. You can even upgrade the bomber ants so they carpet bomb an entire area. 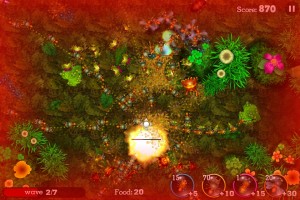 The trails aren’t permanent, as you can hold your finger on any trail briefly until a delete button appears. This adds to the strategic gameplay, as you can constantly redirect or concentrate your six-legged solders. It would be nice if you could extend or reshape existing trails on the fly, but that’s not possible, forcing you to delete and redraw. My strategy was to have worker ants travel alongside the soldiers to gather the spoils, with spitters providing flanking cover. But the great thing about this game is that there’s no right answer, the military strategy is up to you.

The next step is to choose how many ants of each type you want to spawn. There’s a spawn button for each of the four different ant types, but you can only create new ants if you’ve gathered enough food. So, while you’re attacking and defending the anthill, you also need to be collecting food and deciding how many of each ant-type to spawn.

Each type of ant has three extra strengths to unlock. Worker ants can gain speed, backbone, or courage; while soldiers can be upgraded with brutality, toughness and grenades. Each upgrade costs stars, which are gained based on your level scores, or optionally purchased via IAP (which is not necessary). If you missed any stars, you can return for them later, after you’ve upgraded to make it easier.

Anthill delivers three territories (worlds) to unlock and complete, with over twenty levels in total. Each level is allocated a different star value. To complete a level and collect those stars, you simply need to keep your anthill intact through each wave of insect attack. A progress bar is displayed for each attack wave, although the behavior of most enemies is random, so each of the levels will vary if repeated.

While this game is enjoyable, there’s two areas for possible improvement. Firstly, the difficulty levels are not too hard, with users reporting they’re often gaining all stars for a level within a couple of attempts. This suggests that different difficulty levels would benefit players wanting more of a challenge.

Secondly, while the graphics look good, some of the enemies are the same color as your own ants, making them hard to differentiate once the screen is buzzing with insects. The enemies have small red health bars, but these are not always immediately obvious. Sometimes you can hear that you’re being attacked, but can’t immediately tell where the attack is occurring. It would be better if the enemies were more obviously differentiated.

Anthill: Tactical Trail Defense is a creative, entertaining, and nice looking game which requires strategic decision making, but still has an arcade feel to it. It’s almost like playing an insect-based tower defense game, where the tower is your anthill, so it’s appropriate that the title includes the words “Trail Defense". If the game gets enough support, the developers plan to release an infinite (timeless) mode in the future. As it stands now, Anthill is still a unique strategy game with entertaining gameplay and a nice amount of content to play through.