I have such a love-hate relationship with High Flyer Death Defyer [$4.99 / HD]. On one hand, I love the visually striking graphics which I think complement the sky-diving gameplay beautifully. On the other hand, the poorly done tutorial and lackluster controls hold back High Flyer Death Defyer from being even an above average addition to the genre. Whether you actually decide to pick up this skydiver is going to depend on how much you love graphics over, well, everything else.

At its core, High Flyer Death Defyer is a sky/cave diver with a heavy dose of exploration and collection quests thrown into the mix. You play as Arreon, a member of the Death Defyers: a group of skydiving explorers charged with discovering new islands (and treasure) in a post-apocalyptic world in which the only human cities reside in the sky.  At the onset, High Flyer’s story is a bit convoluted and confusing, but as you continue playing through the story, you’ll get a better glimpse of what the heck is going on through the game’s comic book style cutscenes. 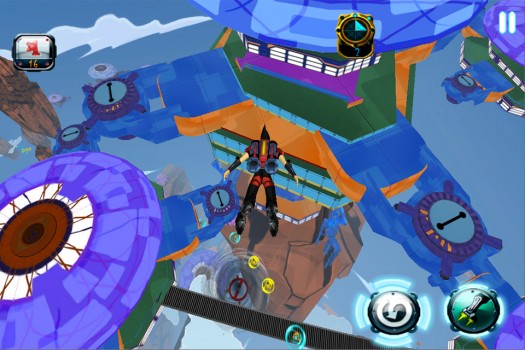 The first thing you’ll notice while playing High Flyer Death Defyer is its well-done cell-shaded visuals. The game’s graphic engine does an excellent job conveying the sense of adventure and discovery that is prevalent throughout most of your play. Even more impressive is its relatively stable and high framerate, a requirement for games that need to convey that sense of free-falling speed. Granted, High Flyer requires either an iPhone 4 or an iPad in order to enjoy the game and all its visual glory.  Strangely, even though the iPhone version is classified as a universal app, a lot of elements will appear blurry unless you buy the separate ‘HD’ version that only works on the iPad. 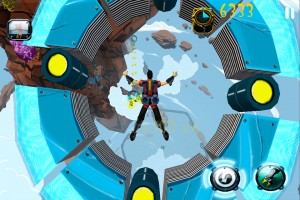 Unfortunately, once you get past High Flyer Death Defyer’s eye-candy, you’re left with a game with a messy tutorial and dreary controls. The tutorial is way too long, doesn’t do a good job of explaining all the gameplay elements, and some tutorial levels are even harder to pass than the post-tutorial levels. In fact, the only saving grace is that you can skip most of the tutorial and head straight to the story, but folks that don’t figure this out (the game does not really show you how to quit the tutorial beforehand), are in for a frustrating initial experience.

You may be able to skip the tutorial, but you can’t avoid High Flyer’s control issues. The game comes bundled with two different control schemes: a tilt-based option that simply does not offer the amount of precision, accuracy and speed needed to do well in High Flyer, and a (default) virtual joystick that lacks the responsiveness and customization necessary in order to use it well. The joystick is a better control option than the tilt controls, but it still leaves much to be desired.

These issues are a shame too, because High Flyer Death Defyer’s story mode is actually well-done. I particularly liked the fact that the game features seamless continuity between stages without any loading screens. Each level has you jumping from island to island, and once you land you get your score, the game saves, and then you get immediate control of your character right where you left off. It’s certainly something that’s not really seen in these types of games. There’s also a lot of content to play through, and plenty of treasures and collectibles to seek out. It’s just too bad that the controls will likely prevent you from ever obtaining the harder items.

High Flyer Death Defyer had the makings of an excellent game, particularly with its nice graphic style, story and core gameplay. Unfortunately, these features don’t mean much when the controls are this frustrating. If Game Mechanic Studios were to address these issues in a future update (and I believe that they can certainly be fixed via an update), then High Flyer might be a game worth checking out. However, in its current state (and current price), I really can’t recommend High Flyer Death Defyer.