A few weeks back, we brought you the news that SEGA was bringing arcade title Brick People [$1.99 / HD] both across the ocean and onto the small screen. Before arriving on iOS devices, the brick-folk were limited to arcade cabinets in Japan. You’d gather up physical bricks to place against the screen, and tiny dudes would climb up and over them to collect fruit. I’m sorry I’ve never had a chance to try it out — it sounds like great fun.

Some of that fun may have been lost in translation when the game moved to iOS. The physical bricks and arcade constraints seem like they would have made the single-player content much more engaging than it is in its current state. It’s much better if you can go head to head, but with only Bluetooth connectivity and, in the HD version, single-device multiplayer, you may be hard pressed to find an opponent. 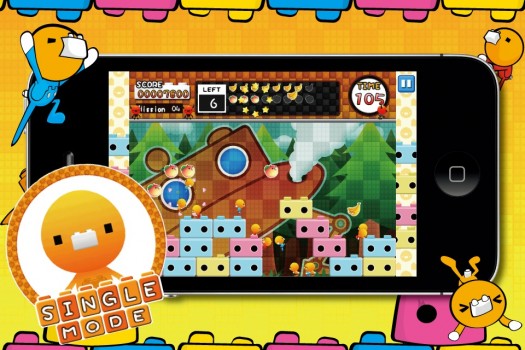 The problem with Brick People’s single-player mode is that it isn’t very challenging. This makes sense for a game where you need to split your attention between the screen and a bin of bricks, but it’s much less taxing to drag those bricks from one part of the screen to another. All you need to do is stack them below your brick people, preferably in piles that will let them climb to the icons floating above their heads. Build a tower that reaches the fruit or numbers or water drops on the screen and the little guys will handle the rest. There’s a smidge of strategy — different colors of brick people have three different abilities to manage — but the AI is rudimentary and you can’t really go deep.

You’re on a timer, with only 150 seconds to complete as many levels as you can. There are twenty or so, interspersed with Brick Monster challenges. The brick monsters require you to stack bricks into specific shapes, something that is never difficult. The time left on completing those levels gets added to your total, keeping you going a bit further, but eventually the clock will tick down. Fear not! When that happens, you’ll be offered a nearly consequence-free continue. No matter how many times you’ve already failed. See the problem?

Whether you perform well or limp your way across the finish line, your score will be totaled when you complete all of Brick People‘s levels. You’ll be ranked on the Game Center leaderboards, the only bit of competition you’ll encounter. There are achievements too, but most of them involve playing the game a certain number of times on each of the three difficulty modes. This isn’t really “replay value" as I understand it.

The multiplayer fares much better. At the start of the game both opponents are given randomly selected special abilities that can be activated by collecting brick monster symbols in their individual playing fields. It’s a race to the finish, so it can be tough to decide between collecting more fruit or messing up your rival. The first player to win three rounds takes it all, so matches are satisfyingly lengthy. It’s the most fun when you can see your opponent across an iPad (though I ran into a few bugs with the multitouch implementation), but the Bluetooth play isn’t bad either.

Unless you’re just dying to play Brick People with someone you’re sharing a room with, though, multiplayer doesn’t really make up for a lackluster single-player experience. It’s cool that SEGA has tried to share a unique arcade experience with the rest of us, but it seems that this is one of those “you had to be there" things. On iOS, Brick People doesn’t feel unique, it just feels dull, the sort of dull that adorable art and wackiness can’t fix.