Free-to-play and I don’t get along too well. If it’s not the embedded ads turning me off, it’s the oddball paid power-ups and the off-kilter balance and experience boosters. In the worst cases, it’s the lack of fun because a developer pulled it out  and made it a paid feature to sponge revenue. I’d rather just pay up-front and get the entire experience from the get-go. It saves me time and frustration.

Steambirds: Survival makes F2P an exceedingly easy pill to swallow. It looks sharp, it seems to function just fine on a mechanical level, and its fun without needing to immediately pump money into it. In the early going of our preview build, at least, it appears to have all the functionality and fleshiness of a paid game, minus the paid part. This is what this new-age of free-to-play is supposed to look like, right? 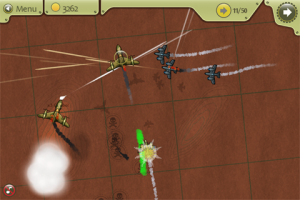 I don’t think fans of Steambirds [$1.99 / HD] are going to be disappointed or overjoyed with what’s going on in Survival — it’s essentially the same game with free-to-play currency bolted on. Just like in the original, it’s a turn-based 2D strategy game that revolves positioning the gun-equipped side of your plane in smart firing positions. What makes this particularly engaging is the fact that you need to account for enemy movements before your own. The more enemies, the finer the strategy gets, even though there’s all sorts of explosive power-ups that give you a slight edge in confrontations.

It might just be me, but I love this kind of ramped back and dry action experience. I get the same kind of enjoyment from meticulous placement and observation in Survival as I do in a more intellectual puzzle-y type game. 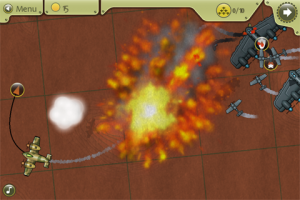 We’ve been told that Survival has 64 different missions and while that’s probably true, the first handful look, feel, and play pretty similar. This is natural issue since Survival is primarily a wave-based “go get the enemies” type of title and all, but the same-yness makes me wonder where the legs are if it has any at all. I think the core mechanics are good enough to keep people interested in bursts, but beyond that?

You know, maybe the legs are in the currency. As you play, you earn coins that you can then turn and use to unlock new aircraft, recruit AI pilots to join you, and buy new levels. You can, of course, buy these coins with real cash, as well as pay to unlock all the levels in the game and disable its atrocious ads. Considering the prices on this stuff, it appears as though it’ll take some time to unlock everything.

Survival is coming pretty soon, so we’ll give the full build a good look and probably report back to you on what it has in store. Based on what I’m seeing now, though, Survival seems to be a friendly F2P title that doesn’t dole out the fun part in exchange for money, and that is a pretty big deal in my book. Oh! And the game part is pretty hip.