Commander Pixman [99¢] from One Minute Games is a retro platformer. In fact, it’s so retro that the graphics are intentionally pixelated, the landscape is formed by a simple yellow line and the background is an old-school scrolling star-field. Graphically, this is platforming cut down to it’s most basic form. And I’m totally enjoying it.

Commander Andrew “Pixman” Blazkowicz has crashed and must escape from an alien base by reaching the end of each level. If we do this fast enough, we’ll be awarded three stars. And if we kill all the enemies on a level, we’ll receive a red badge. Both of these goals can be completed in one attempt, or during separate runs. This allows a rapid enemy-avoiding run-through and a separate unhurried enemy-hunt, squeezing more playability from each level.

There’s a healthy 80 levels in total (65 plus 15 extra bonus levels). Each level is small and the goal is to complete them quickly, with some levels completed within a few seconds. This isn’t a large platform game which takes ages to explore like Emberwind [99¢/HD], instead it’s a rapid sprint, more like Mos Speedrun [$1.99/Lite], but here you’re armed with a weapon. This is a game where you’ll die every few seconds and then try again. You can quite easily die and restart 10 times in a minute, but that’s all part of this game. Just reaching the end of the level, is enough to unlock the next level. 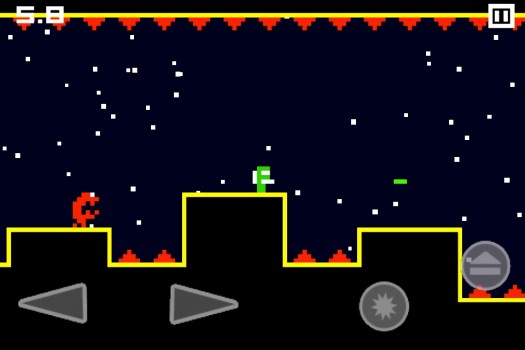 To unlock the bonus levels you can complete objectives to prove you’re not a rookie. For example, completing level 20 unlocks the first bonus level and reveals the next objective: to earn an enemy-killing badge on level 22 within 13 seconds. Although having seen how hard the bonus levels can be, unlocking them is the easy part!

The game description mentions there’s “over 20 hazards, monsters and utilities". This includes mines with delayed detonation, gravity lifts, trampolines, spikes, crushers, automatic turrets and teleportation portals. There’s dissolving platforms and keys for locked areas. With simple graphics there’s a risk of the levels appearing repetitive, but pleasingly, they feel well designed and varied, with enough difficulty to be quite challenging without being impossible.

To progress in this game you need quick reflexes and precision movements, as the enemies are often patrolling within a confined area leaving you just a tiny window of opportunity – a mere split second – to land in exactly the right place. So, the inevitable question is: “What are the controls like?" 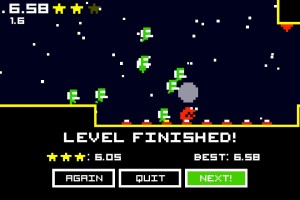 Well, there’s virtual buttons for moving left or right, jumping and shooting. The left, right and shooting parts work fine, but the floaty jet-pack jumping takes some getting used to. If you watch really carefully, Pixman’s jumps seem to be slow at the start, then speed up –  and that teeny, tiny, nanosecond of delay at the start means the enemy often runs into you, whereas you might have expected to jump free. The jumping is such an important part of this fast-paced game that it needs to be perfect …and it almost is, it just takes some time to become accustomed.

After completing a level, you can watch your previous attempts all clambering simultaneously across the level in a mass-replay. It displays up to 40 simultaneous previous-attempts on a recent iOS device, or 10 on an older device for performance reasons. This ensures the game can run on older devices. After watching the trailer, some people may mistakenly assume you control multiple characters in the game-play, like Grim Joggers [$1.99/Free], but that’s not the case. You control one commander at a time and trust me, that’s challenging enough.

The mass replay feature is interesting to watch, because one-by-one each little green Commander drops off at the point they died, until eventually just one makes it to the finish zone. This feature would be improved if the last attempt was shown in another color, so you can assess your latest performance against other attempts. And since the movements have all been recorded, it would be nice in the future to have the option of a ghost of your best time to compete against.

With its emphasis on speed and times, this game is crying out for Game Center leaderboards and achievements, but unfortunately these aren’t provided yet. However, the developer plans to integrate Game Center in one of the first updates and is also working on a content update that provides 20 harder(!) levels. The game does track some statistics already, such as your best time for each level and totals for time spent playing, stars collected, deaths and number of enemies killed.

Commander Pixman is a good game for hardcore platform gamers. It’s fast-moving and challenging, with simplistic retro graphics and some heavier than usual background music. It’s not for the death-adverse, as you’ll die frequently and it requires skill, impeccable timing and perseverance as it’s not easy to gain three stars for each level. If you can handle that, then it’s also extremely satisfying to finally beat a level. Who knew eight seconds could leave you feeling so proud?