Instead, though, I’m trying to get this bad taste out of my mouth.

You see, Do Do EGG! is a good game. And what you get for your $0.99 isn’t too shabby: 20 puzzles, one arcade mode and both single-device and Game Center multiplayer. You also have the opportunity to unlock three more arcade modes through skilled play. If you look at it in that light, the value proposition is pretty darn good. 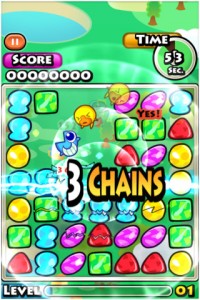 Or you can look at it another way. Despite paying for the game, you only get one out of four of the game’s arcade modes. You only get one fifth of its puzzles. You can technically unlock three of the other modes through skilled play, but the high score barriers you need to hit are quite high. If you want the rest but can’t hit those goals, you’ll be paying a dollar more for each. If you want the other puzzles it’s going to be another dollar. And an oddly persistent banner ad for PONOS’s other games sticks around through most of those purchases. Eventually it starts to feel a bit like a shake down.

It’s a shame, because Do Do EGG! deserves to be enjoyed. As much as it may look like one, it’s hardly a match 3 at all. Your goal is, instead, to make combos that are as long as they possibly can be. Instead of matching one color of egg, you only need to match the colors of the first, the fourth, and every third egg after that. The pairs in between can be any colors at all. This will leave all your match-3 instincts screaming for a while, but once you get used to the change it’s great fun, with all kinds of ridiculous combos to be made.

While you’re doing all this, a clock ticks down. As you create incredibly long chains, you earn experience and level up. Each time you reach a new level the time on the clock resets. You have until you run it down to play, so you always need to make more chains and earn more points. 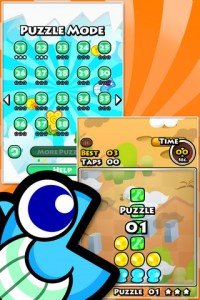 In Normal mode, which comes unlocked with your original purchase, that’s all there is to it. You keep going until you can’t. 1 Minute mode is the same, but you only get a single minute to play. Mission mode is something special — you only earn points for completing a random goal, which keeps changing up as you progress. There’s also endless mode, which is as timer-free as it sounds.

There are also 100 puzzles available, and they’re a great way to gain a better understanding of the game if you’re still struggling with your match-3 instincts. They provide a slower-paced challenge and introduce players to trickier concepts like stake-outs, where your first egg is also your last.

Finally, there’s multiplayer, which thankfully isn’t kept behind an extra paywall. Score Attack is the standard way to play, but if you want to stay on one device there’s also a quick and dirty turn-based mode where the board clears as you go and the winner is the last to be able to make a move.

If all of this had been included in one purchase I’d have no trouble recommending it. If Do Do EGG! were free up front, the piecemeal lockouts wouldn’t be so frustrating. Instead, it’s just about the worst combination: pay up front, then again and again — all while ads hang over the action. If you’re up for the challenge of unlocking all the modes with their high-score barriers, then I’d say hop in. But if you just want to pay for the game and then play it freely, you’ll find far too many dead ends here.